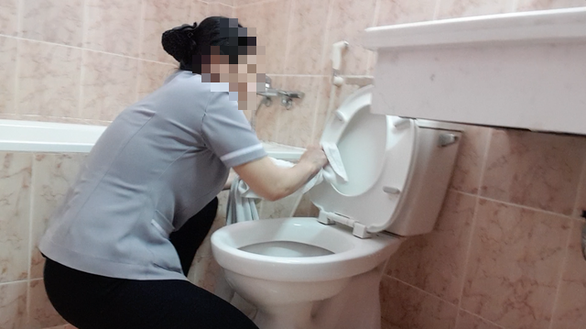 Using bath towels to clean the toilets and not changing bed sheets between stays are among the ugly truths revealed in an exposé by Tuoi Tre (Youth) newspaper, whose reporters have gone undercover as housekeepers at two hotels in Ho Chi Minh City.

The hotels where your correspondents worked as room cleaners were randomly selected, with one located in District 1 and the other in Phu Nhuan District.

The unhygienic practices observed there are not necessarily commonplace at lodging facilities in the southern metropolis, and there is no sufficient evidence to conclude that the cleaning staff followed orders by their managers.

The exposé only sheds light on the dark side of hotel room services not everyone is aware of.

The names and identities of the individuals mentioned in this article have been changed to protect their privacy.

On the first working day at T.T., one of your correspondents was carefully instructed by Thuong, leader of the cleaning staff there, in how to replace trash bags and clean the bathroom, which includes the toilet, sink, and bathtub.

According to Thuong, all those amenities had to be completely dry, and cleaners had to never forget to spray air refreshener after tidying a room.

On the second day, the Tuoi Tre reporter was assigned to clean 25 rooms using only two pieces of cleaning cloth.

But as the undercover journalist was carefully working, another housekeeper named Huyen apparently lost patience watching such a ‘slow’ pace and jumped in to give your correspondent some ‘tips.’

Huyen grasped a bath towel and used it to clean a toothbrush cup.

“Watch out as someone may come in while you are doing this,” Huyen advised.

Then, Huyen went on to use the same towel to clean the toilet and bathtub.

To reassure the shocked reporter, Huyen said, “Thuong had allowed me to show you this tip.”

In fact, the team leader did not seem to care when Huyen was giving the demo.

“See? Spotless,” Huyen proudly said after she had finished the cleaning.

“This is why the next time you stay at a hotel, never use towels,” she added.

Likewise, Huyen used one toilet brush to clean almost everything in the bathroom, from the toilet to the sink and bathtub.

In addition, the cleaners used pillow covers to wipe the mirrors and clean over the bed.

“Make sure you left no hairs on the bed,” Thuong told your correspondent.

One bed sheet for all

The other day, when the woman in charge of washing the bedding and towels at the T.T. hotel took a day off, the cleaning team tried to limit the number of these items that needed washing.

They did collect used towels, but to fold and put them back to serve the next guests, instead of bringing them to the washing room.

This unhygienic cleaning practice was also adopted at T.A.M. Hotel in Phu Nhuan District, which offers services by both day and hourly rates, as observed by another Tuoi Tre reporter who went undercover as a cleaner there.

“Blankets are washed every three days,” Huong, a housekeeper at the hotel, told your correspondent.

For bed sheets, the rule was to “only replace those tainted with unclean substances.”

“Otherwise, there's no need to change them,” Huong underlined.

Other cleaners at T.A.M., including experienced ones, also gave the Tuoi Tre reporter the same instructions.

“If the bed sheet is not dirty, don’t change it, just make it look nice and straight,” said Linh, a veteran cleaner with more than ten years of experience.

Mai Thi Nghi, who teaches hotel room services at the A Au Vocational School in Ho Chi Minh City, said what the housekeepers had done broke the code of ethics in hospitality.

According to a government decree that regulates measures to ensure security and safety for tourists, all hotels and motels providing accommodation services are required to change bed sheets, pillow covers, blankets, and towels after every guest’s stay.

"In hotels that comply with the safety and hygiene regulations, they use towels of different colors for different purposes,” Nghi said.

“For instance, dark blue towels are only used to clean cups, light blue for floors, and red for bathrooms.”