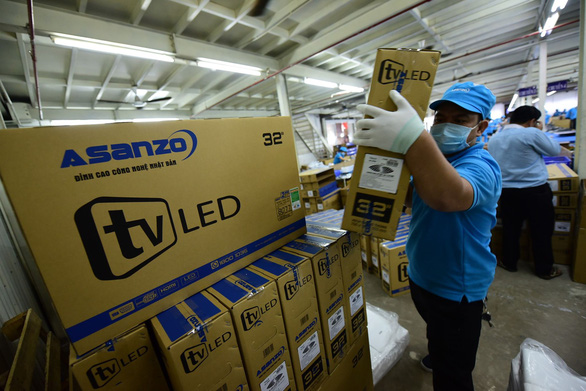 Asanzo Vietnam JSC faked its evidence when announcing on Tuesday it was using a Japanese technology transferred by Sharp-Roxy (Hong Kong), Masashi Kubo, general director of Sharp Vietnam, said in a press release on Thursday.

Meanwhile, Asanzo claimed during the press meeting on Tuesday that its business cooperation with Sharp-Roxy (Hong Kong) is still valid.

The Vietnamese firm also mentioned a confirmation that was said to be made by Sharp-Roxy (Hong Kong).

General Director Kubo asserted that the confirmation was “counterfeit.”

Asanzo faking its evidence has caused serious damage to the brand of Sharp Corporation, which has been built over the past 107 years.

This is unacceptable, Kubo continued, adding that Sharp Corporation and Electronics (Vietnam) Company Ltd. are looking at necessary legal procedures and may file a lawsuit against Asanzo in order to protect Sharp’s global trademark.

Asanzo organized the press meeting on Tuesday to announce its rebuttal of all allegations of product origin fraud, according to local media.

The firm was quoted as saying it has resumed business operations following a short shutdown.

In June, Tuoi Tre (Youth) newspaper published it exposé accusing Asanzo of having been importing Chinese electronic products and components while claiming that its goods were made in Vietnam.

Competent agencies then stated they would announce the result of their investigation into the accusations on August 30.

However, no conclusion has yet to be announced so far.

In a press release on September 5, the General Department of Vietnam Customs stated Asanzo had had a business relationship with 58 companies between January 1, 2017 and June 30, 2019.

These firms have been trading electronic components and goods with Asanzo, according to the customs agency.

Among them, managers of 14 companies have already run away, while seven others have shut down.

About four firms are no longer headquartered at the addresses stated in their business permits.