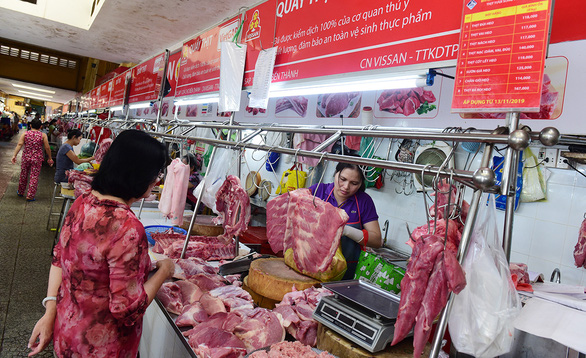 Deputy Prime Minister Vuong Dinh Hue has censured the Ministry of Agriculture and Rural Development (MARD) for failing to properly deal with a low supply of pork and a rapid increase in pork prices.

In a document issued by the Government Office on Wednesday, the deputy prime minister ordered MARD to report the situation to the Office and relay what is being done to stabilize market prices in the final few weeks of 2019.

Deputy PM Hue also asked the ministry to review its procedures and use this experience to mitigate the situation moving forward.

The agriculture ministry will also take responsibility for the shortage of pork and the resultant surge in pork prices as well as the effects it has had on people’s daily life and the macro-economy.

The price of pigs jumped 316 percent between June and December, currently sitting at the record high of VND95,000 (US$4.1) per kilogram.

Representatives of large meat production companies in Vietnam, such as CP, Emivest, and CJ, anticipate that pork prices will exceed VND100,000 ($4.32) per kilogram by the end of this year, citing the fall-off in herds raised by household farms as the cause.

Farmers, however, have chosen not to replenish their herds.

Instead, they have been pushing their pigs to weigh more than the swine should, as much as 140 kilograms per hog.

“Before, a pig was sold when it reached 100 kilograms. Now, farmers are not selling the swine until they hit 120-130 kilograms,” said Pham Van Dao, owner of a pig farm in Vinh Cuu District, located in the southern province of Dong Nai – the country's largest animal husbandry locality.

“In this way, farmers can benefit two to three times in terms of cost per extra kilogram of pork,” Dao said.

According to vice-chairman of the Vietnam Animal Feed Association Pham Duc Binh, the skyrocketing price of pigs is an unavoidable result of the African swine fever epidemic that killed off 20 percent of the nation’s hog herd earlier this year.

Binh said it is easy to assume that Vietnam, a country where 70 percent of meat consumption is pork, may face a pork crisis during the upcoming Lunar New Year holiday.

However, he advised Vietnamese consumers to take a different approach in dealing with the issue, including buying other types of meat like chicken and beef, which are cheaper and easier to replenish.