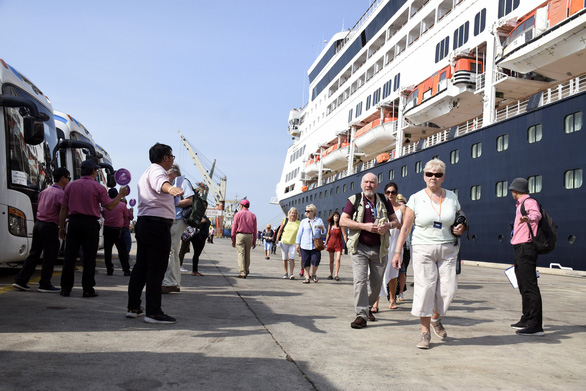 A ship carrying almost 700 European and Australasian passengers arrived at a port in Vietnam on Sunday, having visited Indonesia and Singapore.

The ship, Vasco da Gama, now docks at the Phu My Town port in Ba Ria-Vung Tau Province, located in the southern part of the country.

It brought 699 passengers, including over 300 Australians, 320 Britons, and tourists from New Zealand, the Netherlands, Germany, and Sweden.

The passengers were asked to have their body temperature checked and to wash their hands to prevent the spread of the novel coronavirus, before carrying out entry procedures.

No infection was detected among the passengers.

Tens of cars and 100 tour guides were present to take them around Ho Chi Minh City, My Tho City, located in the Mekong Delta province of Tien Giang, and Ba Ria-Vung Tau Province.

They had had their body temperature monitored and their hands washed before picking up the tourists, with the cars also disinfected.

The Vasco de Gama had visited Indonesia and Singapore. She is scheduled to leave Vietnam for Cambodia on Monday afternoon.

On February 22, the MSC Splendida also brought nearly 1,400 passengers from Europe and the Americas to the Phu My Town port.

The novel coronavirus has infected nearly 89,000 people and killed over 3,000 others around the world, mostly in China.

Infections have been confirmed in Asia, Europe, the Americas, Africa, and Australasia, with major outbreaks recorded in South Korea, Japan, Italy, and Iran.

Vietnam reported 16 positive cases and succeeded in treating them all.

There is no confirmed infection in the Southeast Asian country at present.