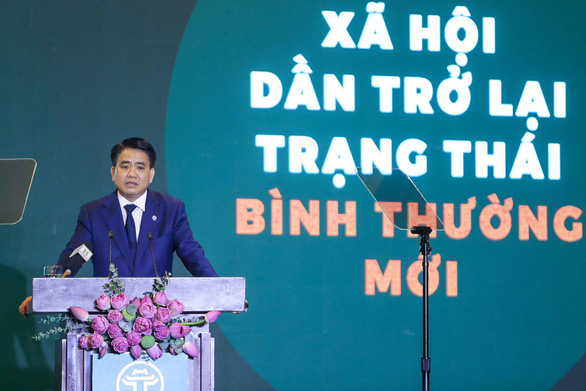 Hanoi chairman Nguyen Duc Chung has said that authorities in the Vietnamese capital city are set to issue investment licenses for 229 projects with combined registered capital of VND405.57 trillion (US$17.6 billion).

Chung made the announcement at the ‘Hanoi 2020 – Investment and Development Cooperation’ conference in the Vietnamese capital city on Saturday morning.

The conference was attended by Prime Minister Nguyen Xuan Phuc, Vietnamese ministers and 1,850 international and domestic delegates, including 1,200 domestic and foreign investors and business representatives.

Chung affirmed that despite the severe impacts of the novel coronavirus disease (COVID-19) pandemic, gross regional domestic product (GRDP) of Hanoi grew by 3.39 percent with 12,650 newly registered enterprises in the first half of 2020.

“FDI [foreign development investment] attraction in the six months reached $4 billion. The state budget revenue for the six months is expected to meet 50 percent of the estimate,” the chairman said.

At the conference, Chung announced that the city will award investment certificates to 229 projects with a total capital of VND405.57 trillion.

He also announced a list of 282 projects in Hanoi whose developers are wishing to attract investment with a total estimated capital of VND483.1 trillion ($20.8 billion).

At Saturday's event, the city's leaders and investors signed 38 memorandums of understanding with a total investment of $28.6 billion.

In his remarks at the event, Hanoi’s Party chief Vuong Dinh Hue said that the capital city is the leading development driver in the Red River Delta and the whole country, currently contributing 16.7 percent of gross domestic product (GDP) and nearly 19 percent of the state budget revenue despite accounting for only one percent of Vietnam’s land area and 8.5 percent of the national population.

Hue emphasized that the ‘Hanoi 2020 – Investment and Development Cooperation’ conference is an opportunity to exhibit cohesion between the authorities and leaders in Hanoi as well as other provinces and cities and investors, businesses, agencies and organizations.

He affirmed that Hanoi will continue to show its determination to be a pioneer in Vietnam's post-pandemic economic recovery and development in 2020.