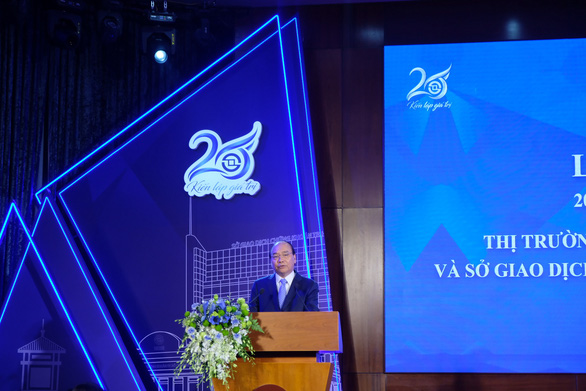 Prime Minister Nguyen Xuan Phuc on Monday asked authorities to bring in measures so that the Vietnamese stock market could be upgraded to the 'emerging market' status as soon as possible.

The head of government was speaking at a ceremony held in Ho Chi Minh City to celebrate the 20th anniversary of Vietnam’s stock market and the Ho Chi Minh Stock Exchange (HoSE).

The Vietnamese stock market remains in the Frontier Markets group.

In September 2018, it was added to the watchlist of the British provider of stock market indices and associated data services FTSE Russell for a possible upgrade to Secondary Emerging Market. But it only satisfied seven out of nine criteria one year later.

The remaining issues are related to the equal rights of foreign investors.

Information on businesses and legal regulations on the market do not always have English versions and are not provided in time, according to the local brokerage Bao Viet Securities.

At the same time, the Vietnamese version of such information still needs more improvement. The provision of capital before being traded remains an issue that may have prevented Vietnam from being upgraded to the Emerging Market status.

Speaking at the event, PM Phuc said the local stock market should soon become an emerging one whose quality and competitiveness would be on a “regional or even global scale.”

This would greatly contribute to Vietnam’s progress toward a modern, prosperous industrial country in the next 15-20 years, he stressed.

He said the stock market plays a key role in Vietnam’s market-oriented economy as it serves as an effective channel for capital mobilization and integration with international financial and monetary markets.

Founded in 2000 as the Ho Chi Minh City Securities Trading Center, the HoSE had only two public firms at its inception.

For the past two decades, the Vietnamese stock market has had over 1,600 enterprises listed on the HoSE and the Hanoi Stock Exchange, according to Tran Van Dung, chairman of the State Securities Commission.

Their market capitalization has amounted to VND4 quadrillion (US$173 billion), equivalent to around 65 percent of the Southeast Asian country’s gross domestic product.

The HoSE, which is home to many large stocks, accounts for a whopping 80 percent of the total market capitalization.

The prime minister said the government bond market, accounting for some 20 percent of GDP, plays a part in mobilizing capital for the state budget and is among the fastest-growing bond markets in the region.

He said Vietnam’s stock market, despite its relatively young age, has overcome challenges arising from major financial, monetary, and economic crises at regional and global levels, with the latest being the novel coronavirus disease (COVID-19) pandemic.

The local stock market is regarded as “one of the region’s fastest recoveries and most stable markets,” stated the cabinet leader.

He said the ongoing public health crisis has triggered the worst global economic downturn since the Great Depression in 1929-1933. However, Vietnam took dramatic measures to bring the pandemic under control.

Therefore, the prime minister underscored the need to grab the “once-in-a-lifetime opportunity” so that Vietnam could recover and boost its economy and society.

Domestic resources and regional and global capital flows should be attracted to meet the huge financial demand for development investment in both the short and long terms.

Phuc said the local stock market should have significant progress toward its scale and quality to better satisfy the mid- and long-term capital needs of the economy.