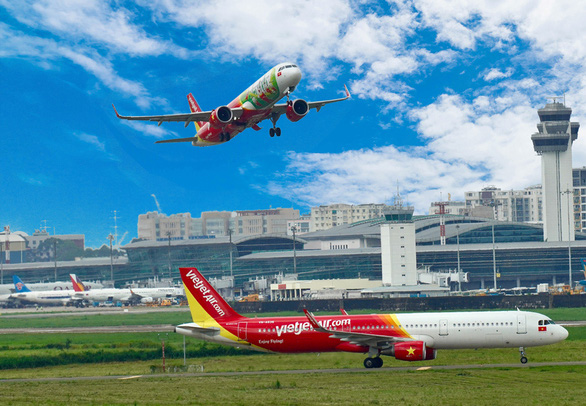 Both national flag carrier Vietnam Airlines and low-cost Vietjet Air reported heavy losses in the second quarter of this year and cumulative first-half deficits as a result of industry disruptions caused by the COVID-19 pandemic.

In its consolidated financial statement for the second quarter of 2020, Vietnam Airlines reported revenues of just VND6 trillion (US$257 million), a 68-percent fall from the previous quarter.

The corporation suffered quarterly losses of VND4.03 trillion ($172.72 million), raising the total losses in the first half of the year to more than VND6.64 trillion ($284.26 million).

It blamed the decline on the COVID-19 pandemic, which forced it to suspend all international flights and also limit domestic services during the social distancing period in early April.

Vietnam Airlines is seeking an urgent bailout of VND12 trillion ($514.3 million) from the government to help it overcome financial difficulties.

Meanwhile, Vietjet Air expanded 52 domestic routes, operated 14,000 flights, and carried more than two million passengers in the second quarter, according to its report.

The low-cost airline recorded revenues of VND1.97 trillion ($84.4 million) in airway transportation, a decline of 54 percent from the previous quarter.

However, the company offset these losses by asset transfer solutions and financial investments, which brought in VND1.1 trillion in financial turnover.

Globally, airlines are set to lose $84 billion as the coronavirus pandemic reduces revenue by half to mark the worst year in the sector’s history, Reuters quoted the International Air Transport Association (IATA) forecast in June.