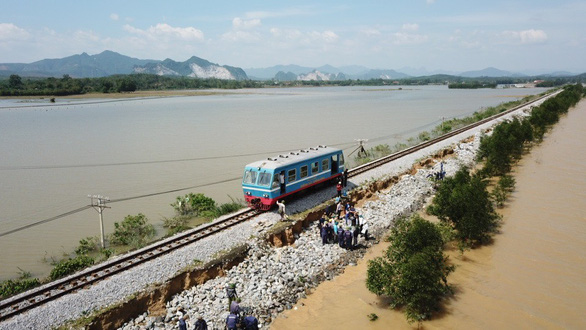 Vietnam Railways (VNR), the state-owned operator of the railway system in Vietnam, incurred a loss of nearly VND27 billion (US$1.16 million) between October 7 and now, when heavy rain lashed the country’s central region, leading to flash floods and landslides.

The VNR’s North-South railway system was temporarily closed twice during that period.

The revenue decline and arising costs caused by those two unexpected suspensions reached VND26.9 billion, according to VNR’s statistics.

Of that amount, VND16.2 billion ($698,000) came from the decrease of passenger transportation.

Particularly, 72 passenger trains were suspended, causing a revenue reduction of about VND9.6 billion ($413,000).

The track, over 30 points in the system, and other railway properties were also damaged by floods.

Some damage was already fixed so the North-South railway services have resumed since 7:00 pm on Tuesday, with the train running at five kilometers per hour through the aforementioned areas.

The VNR currently continues repairing the damaged facilities for the complete resumption of its railway services.