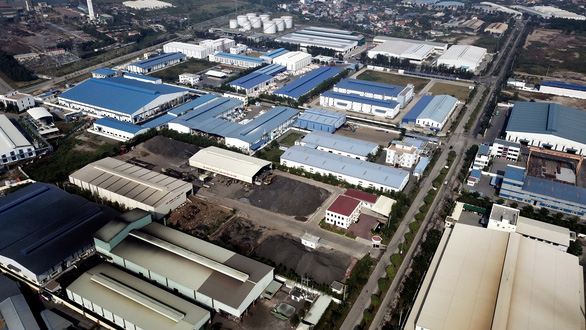 As big tech begins to shift away from China-based production centers, a host of international firms, including major suppliers for Apple, Sony, and Microsoft, are finding a new home in Vietnam.

With big-name contract manufacturers such as Foxconn, Luxshare-ICT, and Pegatron making the move announcing the expansion of production centers in Vietnam, experts expect a new wave of investments into the Southeast Asian country.

What remains to be seen, however, is whether or not Vietnam will find a way to pull itself out of the 'assembler' pigeonhole and move upward in the global supply chain.

On January 18, the People’s Committee of the northern province of Bac Giang issued the investment certificate for the construction of a new Foxconn factory at Quang Chau Industrial Park.

With a registered investment of US$270 million, the project involves building assembly lines for Apple’s iPad and MacBook devices, capable of turning out at least eight million products per year.

One of these projects will be undertaken by Ja Solar PV VN, a solar cell manufacturing operation with a $210 million investment stake from Hong Kong firm Ja Solar Investment.

The other two projects are the construction of factories for Vietnam Risesun New Material and Vietnam Kodi New Material, two subsidiaries of Singaporean firm Risesun.

Bac Giang is just one of many Vietnamese provinces opening its doors to international tech firms.

In March 2020, the coastal city of Hai Phong gave its approval to three new investment projects run by Taiwan-based Pegatron Corporation, a major component manufacturer for Microsoft, Apple, and Sony. The combined value of these projects adds up to $1 billion.

Reports also show that Pegatron is making preparations to shift its research and development (R&D) department to Vietnam from China.

The facility will allow the firm to produce watches, mobile phones, and headphones for Lenovo and Sony.

Back in August last year, while the COVID-19 pandemic was wreaking havoc on a global scale, Silicon Valley-headquartered tech company Arevo signed a memorandum with Ho Chi Minh City’s Saigon Hi-Tech Park on the rollout of a carbon fiber composite 3D printing project able to churn out components for the aerospace sector.

“Once the project is implemented, Vietnam will become the only place capable of fiber composite 3D printing on a manufacturing scale," she said.

"Other facilities are only able to do 3D prototype printing.”

The move is a sign that Ho Chi Minh City’s attempts at drawing in foreign investment are paying off.

During an economic downturn caused by the COVID-19 epidemic, the city managed to reel in R&D operations development projects from several foreign firms thanks to relentless attempts at improving its logistics services and constructing affordable factories for lease.

Local experts seem convinced that there is a tidal wave of FDI heading toward Vietnam.

In a discussion with Tuoi Tre (Youth) newspaper, Nguyen Van Toan, deputy chairman of the Vietnam Association of Foreign Invested Enterprises (VAFIE), said the arrival of suppliers, manufacturers, and assemblers for Apple, Microsoft, and Sony signifies the success of the Southeast Asian country’s plan to attract tech-related FDI.

The presence of industry-leading firms in Vietnam also indicates the country’s success in fostering a profitable environment thanks to a good legal framework and sound policy offers to investors, Toan stated.

The country’s success in attracting tech giants can also be attributed to its early containment of COVID-19, as well as the effectiveness of the government’s special working group on FDI attraction, he added.

According to Nguyen Xuan Thanh, fellow lecturer of public policy at Fulbright University Vietnam, the year 2020 witnessed the continuation of the FDI movement into Vietnam.

Despite slightly plummeting compared to previous years, the FDI tally hit a promising figure of $28.53 billion – a testament to the attractiveness and stability of the Vietnamese market.

Le Anh Duong, chairman of the provincial People’s Committee, said Foxconn’s decision to invest in Bac Giang stemmed from the pre-established relationship between the province and several other Apple suppliers.

The fact that Bac Giang was chosen by many tech 'eagles' can be expounded by the province’s proximity to harbors and airports.

Additionally, the place also offers a flexible investment environment, which appeals to investors.

Upon receipt of the investment registration certificate, the CEO of Foxconn said he had planned to stay in Vietnam through the Lunar New Year holiday for the procedure and was surprised to see the certificate issued in just four days.

According to Duong, the province has promised all investors that it would provide timely support for post-investment procedures, as well as creating opportunities for investors to meet with provincial leaders to work out solutions to issues.

Paperwork can also prove a big obstacle for investors due to legal discrepancies between Vietnam and their home country.

With this in mind, Bac Giang has formed a dedicated working group and a hotline to guide FDI investors through procedures relating to environmental matters, land, factory construction, recruitment, and epidemic prevention.