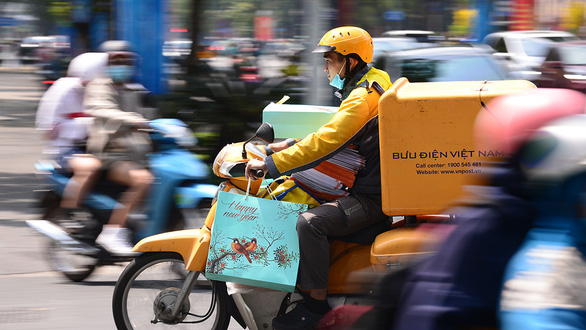 In a bid to collect due tax from foreign service providers, Vietnamese authorities are requiring banks and payment intermediary service companies to withhold and pay tax from the accounts of e-commerce foreign contractors who do not register as a taxpayer in Vietnam, raising concerns over overload and risky transactions at local lenders.

The direction was set forth in a draft circular to guide the implementation of Decree 126, which provides guidance for the application of the Law on Tax Administration.

According to the draft circular, foreign service providers, including Google, Facebook, Amazon, and Apple, must register as taxpaying entities, as well as filing and paying tax money for income derived from Vietnam.

When the foreign companies fail to fulfill their tax liability, banks would be allowed to pay on their behalf by deducting the due payments on the service providers’ accounts.

The General Department of Taxation encourages foreign e-commerce platforms to directly register, file, and pay tax to the Vietnamese taxman for the profit derived from the country, said a leader of the tax authority during a discussion with Tuoi Tre (Youth) newspaper.

If direct taxpaying is not feasible, Google, Amazon, and Facebook, among other e-commerce firms, can authorize a tax agent or a representative office in Vietnam to fulfill the tax responsibility for them.

“Forcing banks to withhold and pay tax on behalf of [foreign entities] is already our last resort,” the official said.

The department will send a list with names and website addresses of overseas e-commerce platforms who did not register to pay tax in Vietnam, while banks need to identify the corresponding accounts.

The tax amount would be deducted from the firms’ accounts once Vietnamese individuals remit money for purchased goods and services to the firms through the banks, then submitted to the tax office on the tenth day of each month.

According to Le Hoang Tung, head accountant of state-run Vietcombank, the lender is ready to undertake tax payment responsibility on behalf of unregistered foreign firms.

The measures have been implemented by many foreign banks, he added.

Yet, Tung also raised concerns over the implementation plan: banks would not be able to pinpoint the identity and account of a foreign firm based off just a name and web address.

For example, in the case of over-the-counter transactions, banks can only track down the sender’s account but not the recipient’s.

“On top of that, it would be hard to track down accounts of Google and Amazon as they don’t open any at domestic lenders,” Tung said.

In a discussion with Tuoi Tre, the deputy director of a major joint-stock bank in Ho Chi Minh City feared that customers would respond negatively to the tax maneuver, which would prompt the banks to provide extra explanations.

To add to the issue, banks would have to mobilize dedicated staffers for the task, not to mention miscalculation risks that might stem from the overwhelming workload and a plethora of tax regulations that differ on each category of goods and services.

Meanwhile, another tax responsibility, which requires banks to keep track of card remittances and payments of other forms that benefit foreign firms before reporting them to the tax office on a monthly basis, is also making banks concerned.

As Tung sees it, a bank in Vietnam has to process tens of thousands, even hundreds of thousands, of transactions via cards and Internet banking per day, which makes the documenting and filtering of transfers based on criteria of foreign suppliers an extremely daunting task.

Meanwhile, a leader of a commercial bank in Hanoi suggested that banks need to be remunerated for their work in deducting and submitting tax on behalf of foreign entities, as the bankers are essentially doing tax collection work for the taxman.

“With the exception of state-owned banks, it is clear that commercial joint-stock banks, payment intermediary service companies, and the Vietnam branches of foreign banks will not feel justified as they don’t reap any benefit from the process,” he said.

The formula to calculate and pay tax on behalf of foreign firms are one major concern with banks, as they are used to collecting tax using detailed information on collected entities, tax amounts, and fees, among others, from the tax office’s notices.

“On top of that, should banks convert foreign currency to Vietnamese dong based on the exchange rate, or should we keep the foreign currency in calculation?” another bank leader questioned.

According to Nguyen Van Duoc, director of Trong Tin Accounting and Tax Consulting Co. Ltd., banks have the option to collect tax immediately with over-the-counter transactions, but the same thing cannot be said about transactions made on personal credit cards.

Duoc says, in theory, tax for e-commerce transactions will be filed by foreign firms, but paid by customers as they will have to pay net price, or price with tax included, for the services or products.

“If the tax office requires tax money to be extracted from personal bank accounts, then the customers would be the one to file tax instead of foreign firms,” Duong said.

In reality, many individuals and businesses in Vietnam have exploited this loophole to commit tax fraud by paying for Google and Facebook advertising services via personal credit cards, then falsely declaring the items in their tax returns.

Echoing Duoc’s ideas, Nguyen Duc Nghia, director of the Legal Advisory Center under the Ho Chi Minh City Union of Business Associations, recommended that the new regulations should also mention the minimum transaction value that qualifies for tax consideration, which will help control the operational cost for banks.

According to Luu Duc Huy, director of the Policy Department under the General Department of Taxation, banks will have to make conversions according to the exchange rate and then declare and pay tax according to Vietnamese currency.

The Ministry of Finance will also provide detailed guidance for banks to implement.

More specifically, one common general tax rate will be applied upon the value of cross-border transactions, instead of different tax rates for each category of goods.