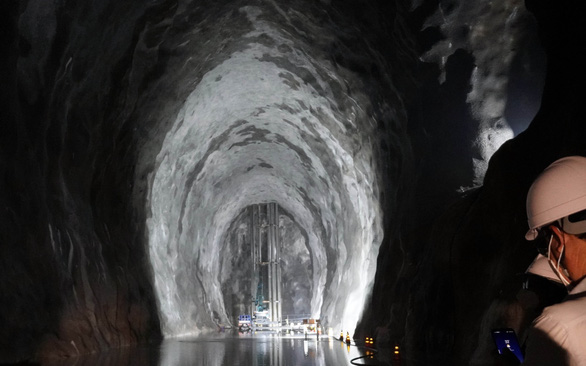 The construction of an underground liquefied petroleum gas (LPG) storage cavern in Ba Ria - Vung Tau Province has been hastened so that it can be completed in about two months, as originally scheduled.

The investor told Tuoi Tre (Youth) newspaper reporters at the construction site that 95 percent of the workload has been completed.

The facility, located at a depth of up to 200 meters below sea level, has a total capacity of up to 240,000 metric tons, making it the largest-ever of this kind in Southeast Asia, according to the investor.

The construction of the storage cavern is expected to be completed in late June this year, Ba Ria - Vung Tau online newspaper reported.

When the cavern is in operation, LPG will run storage through the specialized pipes connected to a pumping system.

All activities related to the facility will be closely monitored through pressure and seismic sensors.

Regarding the reason why the storage cavern occupies a 60-hectare area that was once marshy, experts explained that from the ground surface to a depth of 60 meters is the layer of mud and soft soil but underneath this layer is a stratum of very solid granite.

Wie Chol Ryang, operating director of the underground storage, said that this facility is nearly absolutely protected from natural disasters including earthquakes, tsunamis or volcanic eruptions.

These are prerequisites for Hyosung Vina Chemicals to decide to build an underground facility in this area.

The storage cavern has an expected lifespan of 50 years, and when the term is expired, it may continue to be used if its gas pipelines and other auxiliary works are replaced, said Wie, who once joined the building of two underground gas storage facilities in South Korea decades ago.

Construction of underground storage costs less than that of an aboveground one while ensuring a high land use ratio, said Kim Young Ki, deputy general director of Hyosung Vina Chemicals.

Pham Thi Hong, an executive staff member of the underground facility, told Tuoi Tre that the cavern is located at a depth of 110-200 meters below sea level and surrounded by hard rock structures.

The storage cavern has been designed in an egg shape to ensure that pressure does not concentrate on any point but is distributed evenly, Hong said.

The Vietnamese engineer added that the facility is supported by safety technical factors to keep the LPG stored inside from leaking out.

Hoang Trung, a 36-year-old Vietnamese engineer who is assigned by Hyosung Vina Chemicals to supervise the construction of this underground work, said he is very happy to work at the storage cavern.

“It is rare for anyone to be assigned by the investor as the supervisor of such a large construction, so I feel very proud and happy to work at this cavern, the first-ever of this kind in Vietnam,” the supervisor said.

Commenting on Vietnamese engineers and workers engaging in the storage cavern construction, operating director Wie said that they are hard-working, friendly, and technologically-knowledgeable.

Cavern with many records

This underground LPG storage cavern consists of two compartments, one of which is for propane, with a capacity of 170,000 metric tons, and the other for butane, capable of 70,000 metric tons.

The propane and butane sections have their deepest points at 192 meters and 152 meters below sea level, respectively.

A Hyosung Vina Chemicals representative affirmed that with such sizes and capacities, this underground LPG storage cavern becomes the largest of its kind in Southeast Asia.

The company has also built 10 gas tanks on the ground, each of which has a capacity of 4,000 metric tons.

This is also the biggest-ever gas tank in the world since other tanks of the same type are only capable of holding 1,000 - 2,000 metric tons each.

In addition, the investor has imported and installed a gas separation tower that is nearly 120 meters in height and 10 meters in diameter.

This is also the world’s tallest and largest air separation tower.