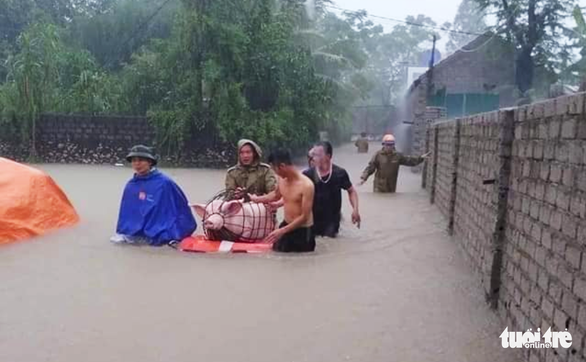 The northern and north-central provinces of Vietnam are forecast to see heavy rain on Monday, with chances of flash floods, landslides, and inundation, while the Central Highlands and southern regions face the likelihood of thunderstorms.

The north-central area on Monday morning reported rainfall of 50-100 millimeters, even up to 120 millimeters in some places, according to the National Center for Hydrometeorological Forecasting.

The heavy rain was accompanied by chances for flash floods, landslides, and local inundation in low-lying and waterfront areas.

On the same day, mid-central, south-central, Central Highlands, and southern provinces may see precipitation ranging from 30 to 60 millimeters, with anomalies of up to 80 millimeters in several areas, in the afternoon and evening due to the impacts of the southwest monsoon.

In light of these weather events, residents should stay highly vigilant, looking out for strange geological happenings, and evacuate from areas at high risk of flash floods, the Steering Committee for Disaster Prevention and Search and Rescue recommended.

Authorities of at-risk locales should check up on unsafe houses in mountainous and waterfront areas, as well as prepare plans to vacate residents from flood-prone areas to safer sites.

Functional forces should also be mobilized to maneuver traffic in flooding zones and fix imminent issues on the road systems.