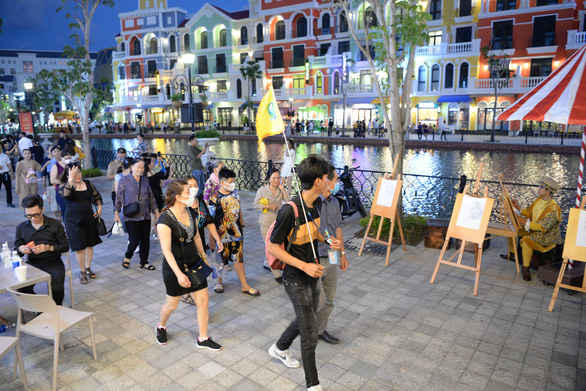 The province and the Ministry of Culture, Sports, and Tourism have agreed that the island city will welcome back foreign travelers late next month, Nguyen Luu Trung, deputy chairman of the provincial administration, told Tuoi Tre (Youth) newspaper on Sunday.

The reopening of Phu Quoc to international visitors with ‘vaccine passports’ will take place in accordance with a government-approved pilot scheme, while a specific plan is expected to be announced on Tuesday, Trung said.

However, the exact date for the island's official reopening will depend on some prerequisites, including COVID-19 vaccination coverage, the official said.

So far, the rates of first- and second-dose vaccination among local people aged 18 years and over have reached around 34 percent and 7.4 percent, respectively.

“Currently, we are mobilizing all resources to urgently vaccinate Phu Quoc people so that all residents will get at least one jab after October 5,” said the deputy chairman.

When the island achieves the required coverage, the province will seek the prime minister’s approval to organize one to three flights to bring foreign tourists to the island as a rehearsal before the pilot plan is launched.

During the execution of this plan, slated to last for six months, Phu Quoc is expected to only welcome international visitors who come from charter flights and package tours organized by travel agencies.

Such foreign guests will be served separately during their experiencing tourism products in Phu Quoc, without contacting local residents, to prevent coronavirus transmission, Trung said.

"We are also working on a scheme to welcome domestic travelers back within this month if airlines and road transport vehicles are allowed to resume operations."

Earlier, Phu Quoc was scheduled to welcome back fully-vaccinated foreign travelers from early this month but the scheme failed following the detection of its first-ever COVID-19 cluster in the community in late September.

Authorities then decided to continue its tourism reopening plan after putting the new outbreak under control.

Phu Quoc, previously a district of Kien Giang, was turned into the country’s first island city on March 1 this year, pursuant to a resolution issued by the National Assembly’s Standing Committee in late 2020.

Over the past years, tourism has really transformed into an important economic sector of Phu Quoc, with the overall increase in annual arrivals to the island city reaching 28 percent, and for international arrivals only, the growth is over 45 percent per year, local leaders said.