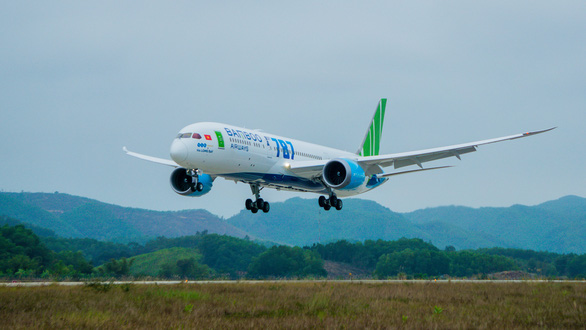 The Ministry of Transport has suggested the Ministry of Foreign Affairs send a diplomatic note to the United States on the designation of Bamboo Airways as an operator of regular flights between Vietnam and the U.S.

Vietnam and the U.S. signed an air transportation agreement in which each of the signatories has the right to designate as many airlines as it wishes to operate international air transport in line with the deal.

The designations shall be informed to the other side in writing via diplomatic channels and should specify charter or scheduled flights, or both.

Currently, Vietnam Airlines is Vietnam’s only designated operator of regular flights between the two nations, and the national carrier is still preparing its flight plan.

In preparation for launching regular direct flights to the U.S. next year, Bamboo Airways has secured a business license for international and domestic air transport and an air operator certificate (AOC) for the B787-9 aircraft in the North American region.

On September 23 and 24, the Vietnamese hybrid carrier operated a round-trip flight between Hanoi and San Francisco as licensed by the aviation authorities of Vietnam and the U.S.

It also completed technical conditions and submitted a dossier to the U.S. Department of Transportation to seek permission for regular flights on June 1, according to the Vietnamese transport ministry.

The Vietnamese ministry assessed that Bamboo Airways has basically met the technical requirements as well as implemented legal steps in accordance with the regulations stipulated by Vietnam and the U.S.

The ministry thus decided to propose designating the airline as an operator of regular flights between the two countries.