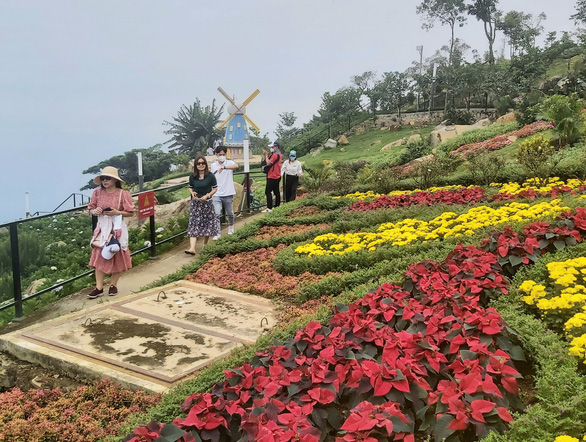 The tourist route between Vietnam’s Ho Chi Minh City and Tay Ninh Province has been reconnected since Monday, hinting at a positive recovery for domestic tourism after months of closure due to COVID-19.

Instead of hunkering down during the epidemic, tourism agencies have invested in upgrading their travel itineraries, waiting to welcome back tourists when restrictions are loosened further.

On Monday, many tourists headed to Tay Ninh Province on the first tour to leave Ho Chi Minh City in months.

Departing and returning to Ho Chi Minh City on the same day, they were able to get on the cable car that went up the province’s Ba Den Mountain, visited pagodas, and experienced local delicacies.

Vu Van Phu, a tourist, said the trip was a gift from his employer to staffers who complied with safety rules and maintained production during the COVID-19 outbreak that has hit Vietnam badly since late April.

“After months of being stuck at home, I feel exuberant as I finally get to leave the city,” Phu said.

His company is also planning a teambuilding event in Ba Ria-Vung Tau Province, where staffers, as well as their families, will be invited to join, he added.

“Ho Chi Minh City has gone past the most challenging time, and everything is going back to normal, with even more optimism,” Phu remarked, referring to a dramatic slowdown in daily infections and deaths in the southern city over the last few weeks, leading to the relaxation of related curbs.

Upon arrival in Tay Ninh, Phu and the other tourists were greeted with flowers from Truong Quang Hung, head of the provincial Department of Culture, Sports, and Tourism.

Ho Chi Minh City is the first locale to reconnect and reopen tourist routes to Tay Ninh after all travel operations were halted for months due to COVID-19 restrictions, Hung said.

The two locales only reached a reopening agreement after safety requirements for tourists and tour operators were settled, Quang added.

“Tourists, as well as tour staffers, must acquire vaccination proof as well as coronavirus-negative test results before they go on a tour,” he said.

According to Hung, 76 percent of the adult population in Tay Ninh has received at least one jab against COVID-19, and the province will open more tourism sites once the vaccination coverage grows bigger.

The city has plans to work with several other localities, including Khanh Hoa, Phu Yen, and Binh Dinh, on promoting the resumption of tourism and helping travel agencies restore more interprovincial tours out of Ho Chi Minh City, Hoa added.

As cross-province tours have made a comeback, staycation experiences in Ho Chi Minh City are also in position for a relaunch.

According to Trinh Nguyen Hung Dung, director of TNK Travel, his firm is running in high gear to complete two projects to welcome back travelers on their tours.

During the tourism pause over the past months, he funneled investment into a farmstay in Ho Chi Minh City’s Nha Be District and turned it into an ideal location for vacationers seeking a pastoral experience.

The farmstay is only 12 kilometers away from the city center, offering a wide range of activities and experiences such as fishing, kayaking, and tree planting.

He is also completing the final touches on an outdoor sports-dining complex in District 10.

“We will prioritize outdoor activities during the post-pandemic period,” the company director said.

During the construction of TNK’s projects, the firm’s employees had to comply with strict safety measures, which will be maintained when visitors arrive.

During the past week, many tourism agencies in Ho Chi Minh City have also reopened their offices and brought staffers back to work, while sending personnel to farms in suburban areas to survey the possibility of tour relaunches.

Tourists in many parts of Vietnam are now able to travel within their provinces or cities, even to other municipalities, as seen from the recently restarted tours from Ho Chi Minh City to Quang Binh Province or Ba Ria-Vung Tau Province, said Nguyen Huu Y Yen, CEO of travel agency Saigontourist.

“However, it is always easier to launch a few pilot tours than to open and sell tours en masse to the public, as agreements between different provinces need to be reached,” he added.

Saigontourist is still examining the capacity of suppliers, vaccination status of personnel on their tours, as well as scouting for lodging facilities that are still in operation, but approval from local leaders is still needed before their tours can return.

Since an agreement on safety measures and tour operations between municipalities is still hard to achieve, the firm is prioritizing local tours within high-demand markets, including Hanoi, Ho Chi Minh City, and Da Nang.