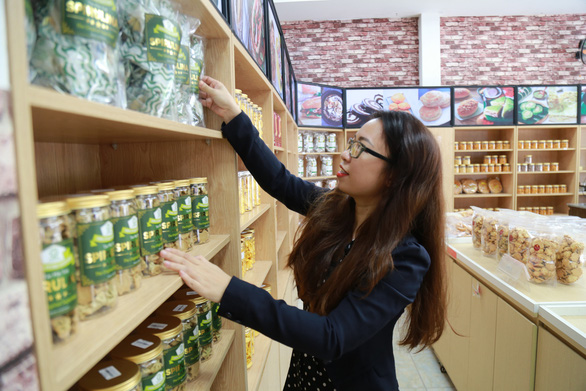 Dinh Nguyen Hoang Thu has made a name for herself in Vietnam's central Da Nang City thanks to her burgeoning spirulina brand.

Thu, 33, began her career as a baker in her family’s cake workshop, but her passion for baking fell by the wayside when she discovered spirulina – a dietary supplement made from algae – while researching functional foods she could give to her grandfather to help him cope with cancer.

Seeing her grandfather’s health improve, Thu became infatuated with spirulina and began researching how she can make it herself at home.

“My parents didn’t want me to make spirulina because they wanted me to follow their footsteps as bakers.

"However, I was confident in myself and my knowledge of business administration, biology, and food. I started looking into Japanese technology [for making spirulina] and how I could make it work in Vietnam,” Thu said.

Taking lessons from experts, books, and the Internet, Thu turned her home terrace into a spirulina lab filled with insect-screen-covered concrete tanks.

In order to cut costs, Thu eventually developed her own model of spirulina production called OCP (open - close - plus) – a method which combines open and closed cultivation methods and ensure the quality of the product.

Making spirulina can be extremely difficult. If the environment and temperature are not perfect, then the algae can go into shock and the entire batch can turn yellow.

Such situations created severe anxiety for Thu, but she refused to quit and instead pushed forward and continued seeking out ways to make her spirulina production a success.

Another difficulty Thu faced was pricing her spirulina products at a point suitable for customers, particularly given the fierce competition with cheap products from China and India.

Eventually, however, Thu was able to develop a distribution network she could leverage to sell the products in small markets and build up her brand’s reputation.

In 2019, Thu established Viet Sun High-tech Cooperative, a spirulina cultivation center, and equipped it with modern machinery capable of producing high quality, fresh spirulina using a process that involves freeze-drying the product immediately after harvesting in order to retain its nutrients.

At her factory, Thu also produces cakes made from spirulina.

All of Thu’s products are marketed under the SpiDana brand and are available on market shelves throughout the country.

So, what is the secret to Thu’s success?

“I think in addition to manpower, health, and capital, a startup must have a strong will. Success will never come if you get discouraged easily. It’s also vital to welcome criticism and gradually improve yourself,” Thu shared.

Thu’s startup project is listed among 30 of the country’s top startups in the Tuoi Tre Golf Tournament for Start-ups 2022 program.