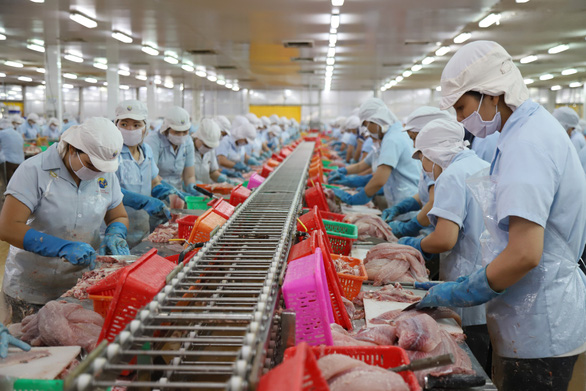 Vietnam’s economy is rebounding from the COVID-19 crisis, with its gross domestic product (GDP) expected to jump to a 7.5 percent growth rate in 2022 from a 2.6 percent increase last year, while inflation is projected to stay at 3.8 percent, according to a World Bank (WB) economic update for the country.

The WB released the predictions in the report 'Taking Stock: Educate to Grow,' its bi-annual economic outlook for Vietnam released on Monday.

The report said the Vietnamese economy started to rebound in the fall of 2021, when high vaccination rates enabled the government to reopen the economy along with gradually removing restrictions due to COVID-19 that hit the country in early 2020.

Vietnam was one of the few countries that managed to grow economically during the pandemic, with the economy bouncing back swiftly thanks to its resilient manufacturing and a robust rebound in services, the report commented.

The country’s GDP expanded 5.2 percent year on year in the last quarter of 2021 and then 5.1 percent in the first quarter of 2022, which was comparable with most of its peers in East Asia, the WB said.

Vietnam continued its GDP growth of 7.7 percent in the second quarter of this year, the highest gain among year-on-year same-quarter growth over the past ten years, posting an overall growth rate of 6.4 percent for the first half of this year.

Based on these positive figures, the WB forecasts Vietnam's GDP to grow 7.5 percent in 2022, higher than its previous predictions of 5.5 percent and 5.8 percent released in April and June this year, respectively.

The bank also projected the Southeast Asian country’s inflation would accelerate to 3.8 percent for the year, lower than the State Bank of Vietnam’s target of four percent, the report said.

This report lays out a set of policy recommendations that could help mitigate the impact of these risks and make the economy more resilient going forward, WB country director for Vietnam Carolyn Turk said in a media release on Monday.

“To sustain economic growth at the desired rate, Vietnam needs to increase productivity by 2-3 percent every year,” the official said.

International experience shows that higher worker productivity can be attained by investing in the education system, as an essential part of a basket of investments and reforms, Turk emphasized.

“A competitive workforce will generate much-needed efficiency for Vietnam in the long term,” she stated.