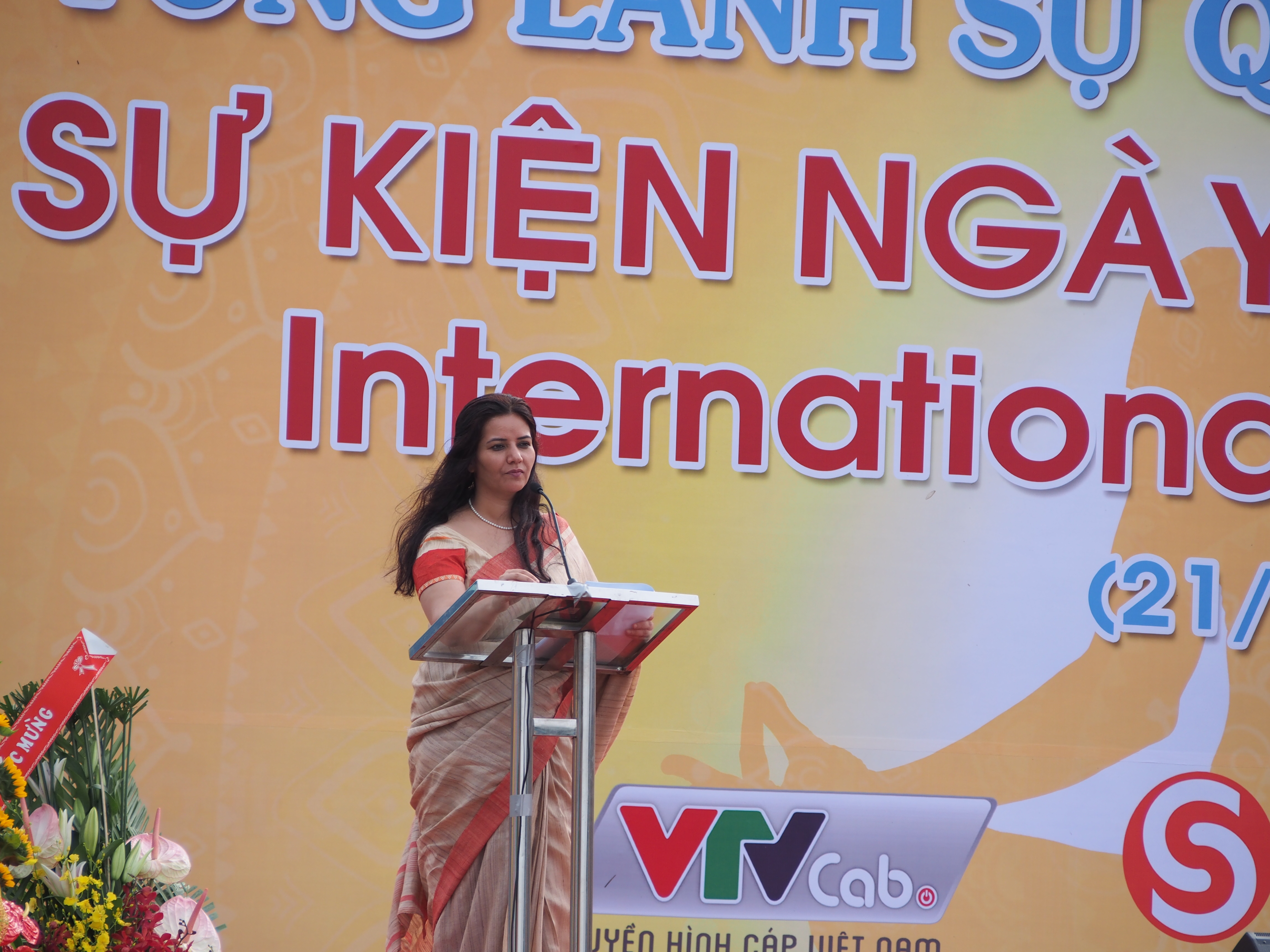 "Yoga is an invaluable gift of India's ancient tradition. It embodies unity of mind and body; thought and action; restraint and fulfillment; harmony between man and nature; a holistic approach to health and well-being. It is not about exercise but to discover the sense of oneness with yourself, the world and the nature," Prime Minister of India Narendra Modi said during his address to the UN General Assembly on September 27, 2014.

The First International Day of Yoga was celebrated in Ho Chi Minh City on June 21, 2015 with huge enthusiasm resulting in a participation of 5,000 people and a mention in the Vietnam Book of Records! An equal number celebrated it in Hanoi and many other provinces and cities, including Binh Duong, Vung Tau, Dak Lak, Lam Dong, etc. The event got commemorated in 192 countries. We feel overwhelmed with the response received worldwide. It was also our honour when Prime Minister Narendra Modi in his address to the Nation on June 28, 2015 mentioned a young Vietnamese child’s (Nguyen Thanh Shuvasri) love for Yoga. Her photo (placed below) got more than 100,000 likes on social media in India and she instantly became a symbol of Yoga enthusiasts and practitioners in Vietnam and also a beautiful bridge between India and Vietnam, having born to an Indian father and a Vietnamese mother.

Subsequently, I have been receiving queries on Yoga and many Vietnamese friends have approached me to learn more about this ancient health practice. I thought it would be worthwhile to pen my thoughts on a 5,000-year-old tradition, which, as increasingly the researches have proven, has huge mental, emotional and spiritual benefits apart from having a healthy body. Yoga in Sanskrit means union. Yoga is the union of body, mind and soul, union with nature, union with the cosmic energy and a feeling of symphony and harmony with all those around us. To achieve this, steps have been elucidated in Yogic literature. There are many schools of Yoga differentiated on their styles (Jnana Yoga, Bhakti Yoga, Karma Yoga, Patanjali Yoga, Hatha Yoga, Kundalani Yoga, Dhyana Yoga, Mantra Yoga, Laya Yoga, Jain Yoga, and Boudhha Yoga), but all united in their understanding that harmony of body, mind and soul resolves conflicts and results in an expansion of our consciousness and greater awareness of Self.

The purpose of Yoga is to seek “know thyself” of Self. It is therefore not surprising that the enlightened ones have adopted Yogic postures, for example the posture of Lord Buddha. The sages in India had always emphasized why sitting with the spine straight was important or why the Ananda (bliss) lay in focusing on breathing called ‘Prana’ in Hindi meaning life force. Aptly so, breath is life and life is breath. However, we largely remain oblivious of our breathing pattern.

To be conscious of one’s breath and to have control over it, and corresponding control over thoughts, are a blissful state. The sign of true Yogi is a sense of calmness and serenity that he transmits and if your Yoga teacher shows anxiety, anger or only focuses on physical aspects of Yoga, he might not be the right one for you. Also, to see Yoga as some kind of physical exercise is notionally wrong. To compare exercises in the gym with Yoga would be to compare chalk with cheese as Yoga aims to take one beyond the confines of the mind and discover one’s true essence.

Shuvasri’s father, a Yoga exponent himself, told me that Yoga is effective only when done in a spirit of selflessness and compassion. The practice has always been taught with noble intentions. Through this article, I would request Yoga teachers to maintain that tradition, to impart free classes and to focus more on meditation and breathing patterns. Some Yoga centers do not explain the benefits of a particular Yogic posture. That would be an incomplete teaching of Yoga.

Smita Pant (R, 3rd), Indian Consul General in Ho Chi Minh City, poses for a picture with many Indian and Vietnamese yoga teachers and trainers for the record acknowledged by the Vietnam Book of Records organization for the biggest number of people practicing Yoga at a time in the Southeast Asian country. Photo: Thoai Tran/Tuoi Tre News

I have also received a number of requests from Vietnamese friends to help organize free Yoga classes. We would be happy to do that. Further information could be found on our Facebook page. We would be organizing a group discussion on the essence of Yoga and we would like Yoga lovers and teachers to participate in it. I also would like to say that as Yoga is done in the spirit of love and compassion, no one can claim ownership over this tradition.

Yoga could make you super fit and can build muscles. The very thing is one would not become like a bunched up muscle. It is not the strength of muscles but the flexibility of the body that is important for the proper functioning of the system. This is Yoga; it does not merely look at the muscular strength but also the health of the organ. The purpose of Yoga is to set another dimension alive within you, which is beyond physical aspects. The body comes to optimal weight but weight loss is only the small result of this phenomenal inner technology that opens the door to so much more.

I would like to conclude the article with a beautiful quote from a famous Yoga exponent, B. K. S. Iyengar: “Yoga is like music: the rhythm of the body, the melody of the mind, and the harmony of the soul create the symphony of life.” People try to create an outwardly perfect life but the quality of life is essentially based on the inward.