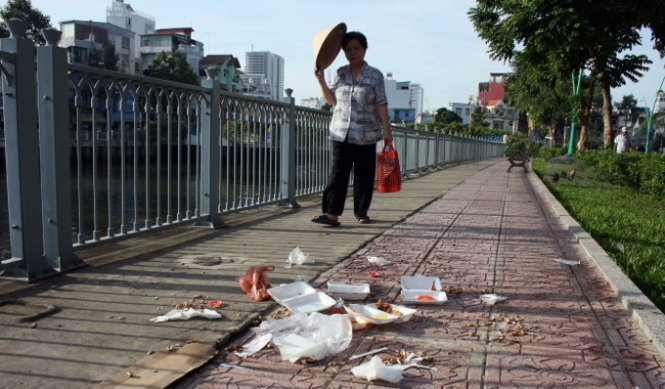 Editor's note: A Singaporean expat has shared his thoughts with Tuoi Tre News on what Vietnam should do to combat people’s bad habit of throwing trash and urinating on the street.

Dr. Ong Kian Soon’s opinions follow a decision by Vietnamese officials to crack down on public urination and littering.

Those urinating in public will be fined between VND1 million (US$44) and VND3 million ($131), a new rule that will take effect on February 1 says.

People caught littering cigarette butts in public will also be fined from VND500,000 ($22) to VND1 million, according to the new rule.

Anyone dumping garbage on sidewalks, roadways and into local drainage systems will be fined from VND5 million ($220) to VND7 million ($308) which is much much higher than the current fine, which is approximately VND400,000 ($17.5).  Fine is good, but not enough

I’ve travelled to Vietnam many times over the past 10 years, so it’s inevitable that I have seen people littering or relieving themselves in public.

Of course when you implement these types of regulations, there will be plenty of doubts and many people may say that such regulations to try and change people's behavior are ridiculous, or will never work.

What Vietnam is facing right now is not unusual. Singapore was in the same situation 20-30 years ago. I remember many years ago when I was growing up in Singapore, there were many "Keep the city clean" campaigns and initially, there was a lot of resistance and many people also thought that such campaigns would never work.

However, in spite of objections to such regulations punishing people who dirty the environment, the government persisted and finally people started getting the idea that it’s bad to spoil the environment.

At one time, Singapore was jokingly called a "Fine" city because there were posters everywhere showing how much you need to pay in fines if you dirtied the environment, e.g. littering in the park, spitting on the ground or passing urine in the lifts, etc.

In Singapore, most people live in government-subsidized housing called HDB (Housing and Development Board) apartments, and sensors to detect urine are installed in all HDB lifts to catch people who urinate there. If these sensors are triggered, the lift door will not open and the police will arrest the perpetuator. If I remember correctly, the fine is $500 dollars.

In Singapore, when a person attracts a fine, police officers will actually take down the person's details and the person will have to pay the fine at the relevant government office. If the fine is not paid, he/she can be taken to court and even be jailed if the person repeatedly refuses to pay the fine.

So, I do think that such regulations are feasible in Vietnam, but the government needs to persist and more importantly implement the fines across the board to anyone and everyone who violates the rules, without fear or favor, so that people respect them.

It is impossible to catch violators all the time. In Singapore violators don’t get caught most of the time. The most important thing is that the regulation signals the government's resolve to stamp out such behavior.

In Singapore in the old days, certain places e.g. dark alleys or small deserted roads or car parks that saw lots of people dumping rubbish had cameras that monitored the area. These kinds of surveillance cameras warn people not to litter or pass urine there. It’s not that expensive to install such cameras and deter crime.

Actually you see it often in Vietnam too. Certain areas around the back of markets, certain people will dump rubbish in the back lanes and these people do it day after day. Cameras are supposed to catch people who persistently litter and have no consideration for others.

In Singapore, surveillance cameras are often used in high-rise buildings (e.g. HDB apartments and government buildings) to catch people who litter. Usually these cameras are deployed due to complaints by residents that a certain area is dirty because lots of people litter. In a way the government in Singapore is quite responsive in that when people complain to their local town council, the town council will take action by installing cameras in the area of concern.

Looking at the bigger picture, I think that meting out fines to people only deters a certain group from violating the regulations. The really effective method is to "name and shame" perpetuators. This one does not involve money and I would say is even more effective than fines.

There were also some concerns in Singapore that rich people wouldn’t be worried about getting a fine and therefore continue to litter, hence the government implemented a scheme whereby the person who littered would need to perform "community service" by sweeping the road around the place the person lives while wearing a bright green shirt. This of course was made to shame the perpetuators in front of his or her neighbors and it was amazingly successful!

Of course, the best way is to educate people on the importance of protecting the environment and keeping our shared living spaces clean.

This type of education should start at a young age. There is no better place to start than in schools. Schools should play an active role in educating students on such issues. In certain schools in Singapore, it is compulsory that students clean their classroom and surrounding common areas even though there are school cleaners who are supposed to do this. It is part of a student’s character building.

The other method is to encourage people's good behavior by giving due recognition to those that go the extra mile to keep the environment clean. For example, when I was studying, the school often organized trips to the beach to clean up the rubbish on our beaches. Such events are often publicized by the media. In this way, the people who participate in the events learn good habits of how to keep our environment clean and also, the event serves as a positive example.

Ho Chi Minh City should be held in the same esteem as other major, established cities like Hong Kong, London, Dubai, and New York