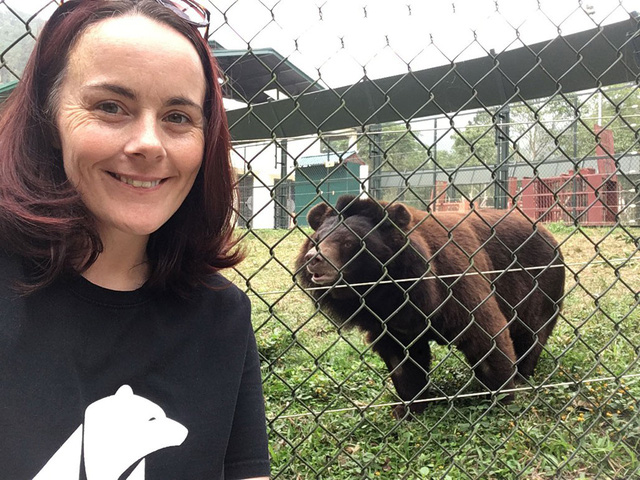 Several experts in wildlife preservation have shared their knowledge with Tuoi Tre News of “myths” surrounding the medicinal benefits of wildlife consumption.

‘Not worth the risk’

I first came to Vietnam in the year 2000 to work in both Cat Ba and Ba Vi National Parks, assisting in a facility which was set up to rehabilitate birds confiscated from the wildlife trade. It was that year that I made a personal commitment to return to Vietnam and improve animal welfare.

I’ve been working with Animals Asia since 2011, holding the post of Bear and Vet Team Director and Animals Asia Vietnam Bear Rescue Centre (VBRC) since 2016. I lead a team of 66 people, both Vietnamese and foreign experts in the rehabilitation of the bears who call our sanctuary “home."

There are currently 175 rescued bears living at VBRC, both Asiatic black bears and Malayan sun bears. Most of these bears were formerly incarcerated on bear bile farms across Vietnam where they underwent cruel and invasive procedures to harvest their bile for use in traditional medicine.

Using bear bile is entirely unnecessary, potentially dangerous to human health, and illegal. The trade in bear bile and bear bile farming have been banned in Vietnam since 1992. We know that it continues to happen due to a loophole in the law which allows people to keep bears in their households.

In 2017, Animals Asia signed a Memorandum of Understanding with the Vietnam Administration of Forestry to work together to rescue bears which remained on farms throughout the country and bring them to sanctuary. In a nutshell, the MOU closes the loophole by forbidding people to keep bears in private residences. The end of bear farming in Vietnam is coming.

It’s not just people’s minds that are changing, but their hearts. We have school children and other visitors who come out to VBRC to learn about our work and see the bears. Seeing the children’s eyes light up when watching the bears forage in their enclosures or splashing in their pools and watching that spark of compassion as they realize the importance of kindness to animals give me so much hope for the future.

Rhino horns are as effective as fingernails

Like many people and organizations involved in conservation in Vietnam, the Cat Ba Langur Conservation Project faces the problem of people poaching animals from the wild to use in traditional medicines on a nearly daily basis.

Tokay Geckos (Gekko geckos) are one of the most commonly poached animals on the island and the majority of them wind up in jars of alcohol or are dried for use in various “treatments” for illnesses, imagined or otherwise.

During breeding seasons, chicks of the Greater Coucal (Centropus sinensis), known as bìm bịp in Vietnam, are caught and soaked in alcohol for “medicinal” uses, as are snakes of all sorts, especially King Cobras (Ophiophagus hannah) and Chinese Cobras (Naja atra).

Much of this is illegal, but it is still common. The laws regarding marine life are less strict and it is common to see seahorses, starfish, and other marine organisms soaked in alcohol for sale in town and marketed as “medicine."

The marketability of these traditional medicines is the primary reason why the Cat Ba Langur (Trachypithecus poliocephalus) is nearly extinct.

The population had already been falling, but when Cat Ba became a tourist destination around 1996, hunting langur to sell as traditional medicine to Vietnamese and Chinese tourists skyrocketed. Locals tell us that 1996-1997 was the period when the Cat Ba Langur went from being a commonly seen animal to one that was hardly ever seen.

There is no evidence at all that eating animals, pangolin scales, rhinoceros horn, or drinking wine that has had various animals soaking in it has any positive effect on health. Some studies have shown that the wildlife trade, the use of wildlife for food or medicine, poses a significant risk of Zoonotic diseases (illnesses that can be transferred from wildlife to humans).

Additionally, when it comes to rhinoceros horn and pangolin scales, people are just eating keratin. This is the same material our fingernails and hair are made of. These people would have the same results eating fingernails and hair collected from a barber shop as they have from consuming the horn and scales of these animals.

In Vietnam the rhinoceros is now extinct, many primates are on the verge of extinction, the pangolin population is falling rapidly, many of the terrestrial and freshwater turtles are endangered, and in some areas certain species of snake have been locally wiped out.

It is very difficult to “make” people change their minds and behavior. People must want to make changes on their own.

Education is by far the most important and effective way to effect a change, but this takes a long time and many of the species in Vietnam do not have much time left if things continue as they currently are. This means that we need to combine education with strong and effective enforcement of laws and that those laws need to be clear.

Education is the first step

I think education is the first step to changing human behavior in a positive way when it comes to increasing awareness and stopping wildlife consumption. Unfortunately, this can sometimes take decades or even generations to achieve. Responsible governments need to take active steps to avoid future disasters by changing and enforcing laws so that environments can be better protected. Ultimately, every human on the planet needs to understand the consequences of their actions, especially in relation to the things we buy and consume. What may feel good or convenient to me may be having a very painful and negative impact on another human or animal life, in Vietnam or elsewhere. Through education, we can develop a greater level of respect for all things.

It is my perception, based on many well researched publications and other forms of media, that most of Africa’s illegal wildlife trade is exported to Southeast Asia for consumption or ornamental use. According to a study published by Traffic (Rhino Horn Nexus), 80% of South Africa’s poached rhino horn went to Vietnam. Since that study took place, I do believe that there has been a reduction in the amount of rhino horn entering Vietnam, which is very encouraging, but, it will take many years for global perceptions to change. Vietnam still carries the label of bearing the most blame for Africa’s rhino poaching. China is a close second. This is something we would like to see eradicated completely and we are looking at Vietnam to become the global leaders in reversing this situation.

Wildlife consumption in South Africa of mainly antelope species for meat purposes is a large and growing industry. However, it has been grown and regulated in a sustainable way so that over the past 40 years, there are now many, many more wild animals in South Africa (from less than 1 million to over 6 million today) in spite of growing human populations. Species such as rhino have never been killed for meat or horn consumption in any African culture.

The regulation of any wildlife consumption needs to be based on scientific measurements of wildlife populations and their habitats. Only when there is excess available does the government issue permits which allow wildlife to be utilized. If the science indicates that there is not enough habitat available to sustain a wildlife population, the laws get changed or wildlife consumption permits get withdrawn so that those populations can recover. People that break these regulations should receive heavy punishments because they are stealing from our society and depriving the world of many beautiful things.

They’re aware that the incident happened everywhere, not only in Vietnam and strict punishment can be one of the solutions