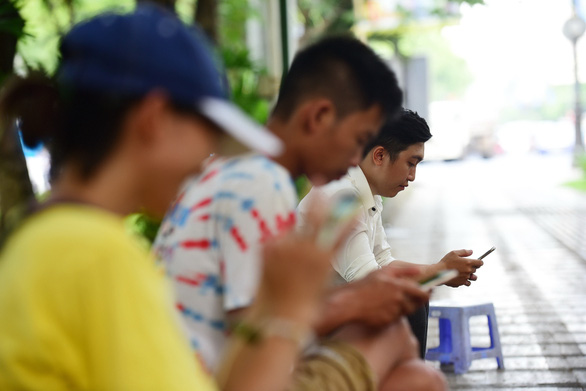 Editor's note: Australian Stivi Cooke offers a look at the online life in Vietnam he has witnessed over his years living in the Southeast Asian country.

Following a request by Tuoi Tre News, Cooke’s comments were made with a focus on the negative behavior of Internet users in Vietnam, in response to a recent index by Microsoft labeling Vietnam as having the fifth most uncivil Internet discourse out of 25 countries.

The Microsoft Digital Civility Index (DCI) measures the tone and tenor of online interactions as reported by 500 consumers in the 25 countries, with the UK, the Netherlands, Germany, Malaysia, and the U.S. being ranked in the top five in terms of online civility.

Meanwhile, rounding off the list of the 25 countries were South Africa, Peru, Colombia, Russia and Vietnam.

I do think the Vietnamese can be pretty rude online, depending on the topic they are complaining about. I see a lot of harsh comments posted on Facebook -- the only real social media I use.

However, I’m not so sure about the Microsoft ranking. If this had been a survey of Facebook, Twitter and other platforms, I believe it might be a bit more credible because there would be a lot more data or evidence to back up the claim.

I’ve read a lot of posts mainly on Facebook and in English-language media although the posts often link to Vietnamese web content which I can half read and the rest I get translated.

The recent posts about the man peeing on a mountain and the beating of the girlfriend in the elevator attracted a lot of comments which included threats of violence, some really rude language and unjustifiable judgements about the behavior of the people involved in the incidents.

The most common arguments and hostility occur with those ‘if you don’t like Vietnam, then get out!’ postings. I understand that the Vietnamese, like everyone everywhere, are very proud of their culture and express strong nationalist feelings, yet that shouldn’t be used as an excuse for nasty, mean or crude replies.

Over the years I have watched Internet etiquette deteriorate a lot. I think a lot more people are using the Internet as a kind of dumping ground for their rage and inability to express in public what they wish they could really say. The anonymity of the Internet is getting more abused every day. Trolling and repeated attacks on innocent posts are frequent.

When it comes to people behaving online, I hate racial comments, particularly against the Vietnamese, that seem to want to justify Western superiority (we don’t dump rubbish, for example – but you do!). But the opposite can be just as bad such as when some Vietnamese user excuses (hey, it’s our culture - don’t you criticize us!) for clearly wrong behaviors (violence against women or queue jumping).

Another thing that I really hate is many people’s reluctance to admit they may be wrong or that the other person has a good point to make. It often just escalates into shouting online.

I do like a good discussion - but not usually an argument. I care a lot about social issues such as education, equality for women, poverty reduction, climate change, and a lot more. I like to ask questions to other people (Why do you think that? Can you explain more fully?) and their comments can be very educational and useful to me, particularly when I’m planning to write an article or opinion piece on these topics. I don’t worry too much about people shouting at me online or being nasty because I have a choice whether to reply or not. Generally, I try to stick to my topic and not to get distracted or emotionally involved. I can often see when someone is trying to bait me or attempt to change the subject. I suspect that is more about their ego wanting to be the most responded to, so they can feel good about themselves.

I think people should not use religion or politics as an excuse for anger. Don’t attack the person – attack the topic. Don’t shout and share the posting space for others to get involved; don’t ‘drown out’ other points of view. Don’t deliberately try to change the subject because you feel you are ‘losing’ the online argument. If you are truly educated, then you are capable of calm discussion instead of throwing rocks at people. And if some people online are stupid -- ignore them -- responding only feeds them.

It costs nothing to be polite and people should also remember that others have long memories, employers do check your online personality and you are not always as anonymous as you think you are, online. Finally, there can be real world repercussions to online behavior and comments -- you never know if someday you might meet that person you abused online!

Manners in most cultures developed as a way/method to stop people killing each other over trivial things – the live and let live idea. Humanity’s ability to accept, without raw anger, another person’s beliefs, race, and other characteristics is one of the ways we’ll become a more civilized world.

Why the UK tops for online civility?

I think the root of the [negative] behavior is the lack of the previous generation being aware of it. Because a lot of these people are the first generations to get online and engage in things like social media, there is no one to monitor it or give them a moral compass. I think that everyone has a bad side to them but online it’s easy to let it out because, unlike real life, the true person can’t be seen or judged.

The difference in behavior among netizens in the UK is due to many reasons. First of all, I feel that the oldest generations in the UK actually taught themselves how to use the Internet, social media and so on. So, funnily enough things like Facebook and Instagram, your parents and even grandparents may be able to see what you’re doing. It’s very much the norm in the UK for your parents to be online these days, much of the time they use it more than us!

Another thing is that, yes, we are shown through school and such, examples of bullying online or abuse to where someone has killed themselves or has been killed so we understand the dangers of such things online. I think another huge thing for us in the UK was the show “Catfish”. I remember when the film and eventually the show was released, we had no idea that people made fake profiles online to affect people; so after we saw it, we began looking at the Internet differently, making our profiles private, and asking questions about people like “Do I know this person?”, “Should this be affecting me?” as a result. You can actually get in trouble with the police regarding online matters so I think that the UK takes these things very seriously. Even our TV shows and soaps create scenarios where such things happen so that every generation in the home is aware of these dangers.

I think, to tackle online behavior, you need to give education to everyone, not just those who you THINK is using the Internet. This way, parents and children have an idea of what is happening and how best to prevent it. You never know how someone will best gain influence. Someone may consider their age mate as more influential than their parents and may stop such things when spoken to by a brother, for example; so I think education and widespread information are best.

Another good way of educating people would be showing examples of people whom it has actually affected. People who have killed themselves due to being abused online or bullied. I think that sometimes people don’t realize that it can really affect others.

Penalties would also be a good thing to put in place, if people have consequences then they are unlikely to do such things. However, the penalties need to be seen through. It’s OK if the law states that you get in trouble if you do things, but if no one is convicted then people take the law as a joke and will continue to do such things.

Shaquille Stewart from the UK