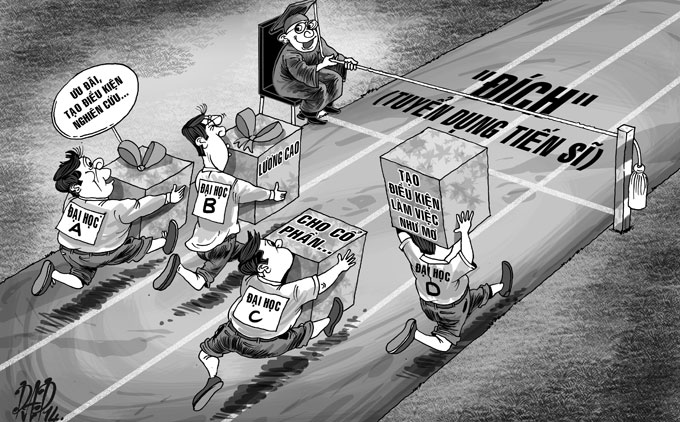 Universities in Vietnam are racing to recruit permanent instructors with doctorates in order to avoid an enrollment ban by the Ministry of Education and Training (MoET), with many schools offering cash in addition to many other benefits, including the right to become the co-owners of the institutions, to their prospective candidates.

In January, the education ministry suspended 71 higher education institutions from accepting new students into 207 university-level disciplines following a MoET inspection at 242 junior colleges and universities nationwide, where the education watchdog checked if they violated its regulations on the number of tenured lecturers.

The ban was placed as a result of a campaign launched by the ministry this year to tighten their control over academic affairs at the undergraduate level in line with a circular issued in February 2011 on university and junior enrollment.

MoET regulations stipulate that a university can only admit students to a certain major if its tenured lecturers are able to cover at least 70 percent of the curriculum.

The university must employ at least one permanent lecturer holding a PhD and three others with a master’s degree in the field they are going to teach, according to the MoET regulations.

They ministry has made it clear that it will shut down the enrollment for any major at any university that proves to be under par.

Leaders of many universities told Tuoi Tre that they have had to resort to visiting instructors since they cannot afford the salaries for permanent teachers due to their financial constraints.

Tenured or permanent lecturers are those who receive a monthly salary from their schools which also cover their health and social insurance while visiting instructors do not have a fixed pay and are remunerated on the basis of the number of classes they teach.

Dr. Nguyen Viet Ngoan, president of Saigon University in Ho Chi Minh City, said the school is trying to recruit permanent instructors with doctoral and master’s degrees in accordance with the regulations so that it can re-introduce the four majors that were already banned from admitting new students.

Universities have different policies to lure lecturers with doctorates while the websites of many schools are now crammed with instructor recruitment advertisements.

Some even try to ‘outweigh’ their ‘rivals’ in the race to employ lecturers by offering more competitive remuneration packages.

Saigon University, for instance, has promised laptops, private working rooms, and favorable research conditions to those with PhD degrees willing to work for them as permanent lecturers.

Meanwhile, the Ho Chi Minh City University of Food Industry has said it will present VND10 million (US$472) per year to instructors who are studying for doctoral degrees and award an extra VND10 million to them when they complete their studies.

According to Dr. Kieu Xuan Hung, vice president of the Ho Chi Minh City University of Technology (HUTECH), those instructors with PhDs who agree to work for the school will become its shareholders and thus have the right to be among the institution’s owners.

The school also creates conditions for teachers who do not have PhD degrees to study for them and grant a further VND30-50 million ($1,415-2,358) to each when they successfully defend their doctoral theses.

Dr. Nguyen Manh Hung, president of Nguyen Tat Thanh University in the southern city, said the school is trying to increase its value by putting more investment into its faculty. “We have had many discussions about policies to attract instructors with doctoral degrees,” Dr. Hung said.

Dr. Thien added that Van Hien is committed to paying good salaries and ensuring the best working environment for these instructors.

Elsewhere, Hung Vuong University in the northern province of Phu Tho has also joined the ‘rat race’ as it offers VND100 million ($4,717) to each instructor with a PhD degree.

“Our policy to attract talents has been approved by the provincial People’s Committee. Since 2010, the committee has annually earmarked around VND2 billion ($94,340) from the provincial budget for helping the school recruit well-qualified lecturers,” Nguyen Nhat Dang, head of the university’s human resource department, said.

Thai Binh Medical University, located in the northern province of Thai Binh, has announced their incentives for PhD instructors, including a VND30 million (US$1,415) support package for each Ph.D.

They could also be appointed to leading positions of the school after passing their probationary periods, the higher education institution said.