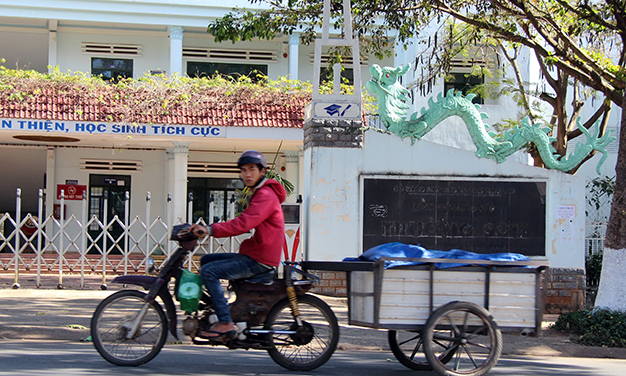 Many vocational schools in Vietnam are now struggling to survive due to a lack of students.

Myriad occupational schools in the central coastal city of Da Nang have received just a small number of applications over the past few years.

“Last year we only had 142 new students, but the number of new enrollees is 50 this school year,” Truong Van Hung, rector of the Duc Tri Da Nang Vocational College, said. “What a tragedy!” he exclaimed, adding the school has set a target of recruiting 1,200 students for the 2014-2015 academic year.

In Vietnam, an academic year usually kicks off in late August or early September, and ends in late May or early June the following year.

“We have just borrowed VND4 billion [US$188,271] to run the school and pay our staff for Tet [Vietnam’s Lunar New Year],” Hung added, saying the school has to pay more than 70 employees.

“Closing the school is just a matter of time,” he lamented. In an even worse situation, Duc Minh Economic-Technical Vocational School in Da Nang’s Cam Le District has been closed for nearly two years.

Similarly, the Viet A Vocational School in Hai Chau District in Da Nang has not recruited any new enrollee for over one year given the absence of job opportunities for its graduates.

“We do not want to enroll because we cannot help students land jobs after they graduate,” a leader of Viet A said. “We will only admit new students when we can have a partnership with companies who can employ our students after they finish their studies.”

Thanks to many incentive policies the school offered to encourage students, it reached around…10 percent of this target. The total number of the school’s students is now just over 200.

“Enrollment is getting harder and harder due to many reasons,” a representative of Dai Viet said, adding that many other schools are also stuck in the same situation.

Elsewhere, vocational schools in the southern province of Dong Nai are ‘frozen’ because they do not have enough students either.

Le Huu Duc, head of professional education at the Dong Nai Department of Education and Training, said the local vocational school system has been in a difficult situation owing to the small number of students applying for them.

“We even sent teachers to local high schools and families to consult and encourage students to apply to our school, but still could not convince them to enter a vocational school,” Vo Duy Chuc, deputy rector of the South-Eastern Electromechanical Vocational School, said.

The lack of students means that equipment for training programs at those schools has been left unused and covered with rust.

Local experts have commented that if the lack of students persists, vocational schools are at high risk of being closed, sooner or later.

Meanwhile, the problem has also hit vocational schools in the Mekong Delta.

The Nga Bay Vocational School in the southern province of Hau Giang has 91 students in total in the academic year of 2014-2015 while it has 55 instructors, so the number of teachers in some majors is even higher than that of students.

Despite the fact that the Hau Giang provincial vocational school was constructed in accordance with high standards for technical majors, it has had enrollment problems since the 2010-2011 academic year.

In 2014, the school only received 179 applications. Many other vocational schools in the Mekong Delta region have also suffered the same fate.

The picture is no brighter in the Central Highlands.

The Truong Son Vocational School in Buon Ma Thuot in Dak Lak Province has had enrollment difficulties since 2008, plus a debt from the land rent.

Nguyen Viet Truong Thanh, chairman of the executive board of the school, said the land rent was free for the school thanks to the education socialization policy at the time it was established.

However, since 2008, the school has had to pay VND200 million (US$9,414) per year for rent, despite the fact that it has not enrolled as many students as it targeted.

In 2014, the school received no new students.

“The school is in trouble with enrollment, however, the government has suddenly changed the policy and forced us to pay rent,” Thanh expressed. “To balance our finances, we have to increase the school fees, but doing so creates more problems for admissions.”