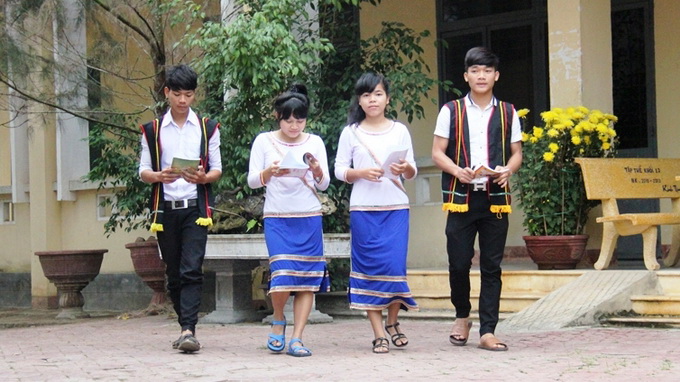 A high school in the coastal province of Quang Ngai in central Vietnam has been using a local ethnic group’s traditional costume as its uniform for over two years with positive results.

Students attending Tay Tra High School in the rural district of Tay Tra have been wearing traditional Cor costumes to school every Tuesday, Thursday, and Friday since the 2013-14 academic year.

The Cor are an ethnic group native to Vietnam who live mainly in the provinces of Quang Ngai and Quang Nam of the central region.

According to the 2009 census, there are approximately 33,817 residing in the country.

The Cor uniform, a blue skirt and white shirt for girls and waistcoat worn over a white dress shirt for boys, is made from locally woven brocade and seeks to help preserve the traditional identity of the ethnicity.

Wearing her school’s uniform, student Ho Thi Mien admitted that the new design felt awkward at first, but “now that we’ve got used to it, I actually feel beautiful and like a real Cor in it."

The idea was first voiced by principal Pham Cong Hoa of Tay Tra High School in an effort to combat the invasion of modern clothing from the lowlands into the daily lives of ethnic Cor.

According to Hoa, in recent years, traditional Cor costumes have lost their appeal to Cor youths and are only worn by elders.

With that in mind, at the beginning of the 2013-14 academic year, Hoa proposed to local authorities, the school board, and village elders a new school uniform designed to represent traditional Cor costumes. The idea received unanimous support from all parties.

“I was thrilled by the positive response,” Hoa said. "Community-oriented education based on the students’ awareness of their identity is the best method in my opinion."

The new uniform is also welcomed by local residents, who have been overjoyed at the sight of the traditional costumes in everyday activities.

“Since the introduction of the new uniform, I have observed remarkable changes in the youths’ awareness of their ethnic identity. This came as a relief for us elders who had been worried that our traditions would fade into oblivion with the disappearance of our costumes,” 78-year-old elder Ho Van Keo said.