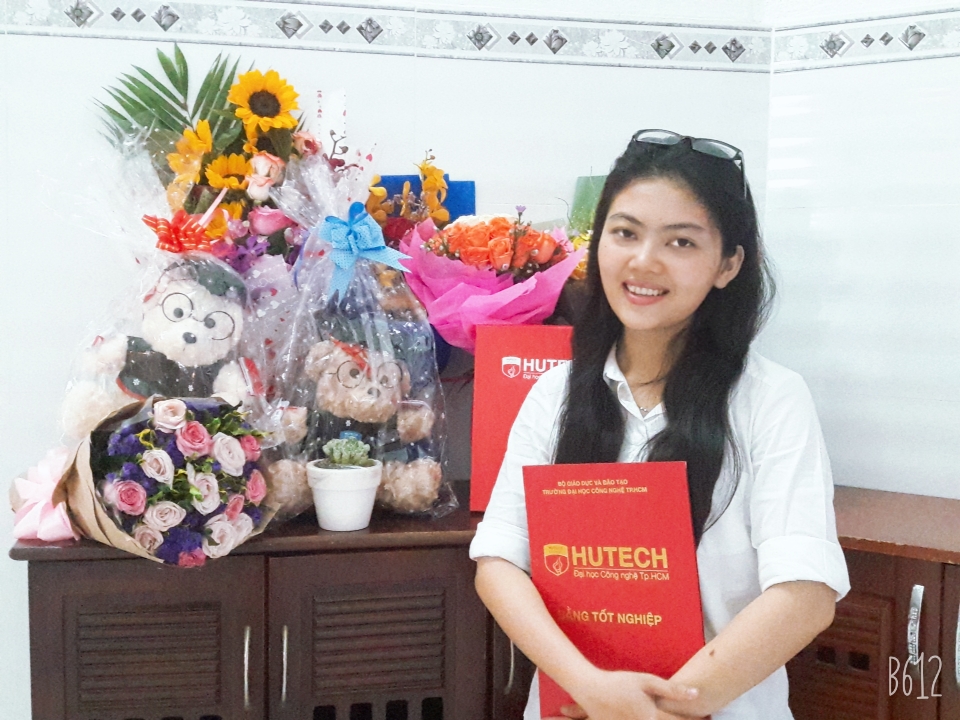 Huynh Thi Nu Nhi spent her childhood selling lottery tickets on the streets. Now, thanks to the help of a global network of philanthropists, she is a college graduate.

Her graduation came one year early thanks to her unmatched work ethic and willingness to take on a heavy course load.

The young woman from the southern province of Long An now works as an accountant at a company in Go Vap District, Ho Chi Minh City.

She joined the firm over a year ago when she was still a student.

People from Nhi’s hometown in Can Giuoc Town, Long An Province still remember the little girl who sold lottery tickets to help her family put food on the table.

Nhi’s father has taken care of her and her brother since they were little, but the income from his watch repair stall was too little to pay for his children’s schooling.

During summer break after Nhi finished fifth grade, she began selling lottery tickets on the streets to help her family.

Calling those days a time she would never forget, Nhi, now 21, said she sometimes still has dreams about her days selling lottery tickets.

“But I was very lucky because many people would buy my tickets out of sympathy,” Nhi recalled.

In middle school, Nhi met with Room to Read, a U.S.-based non-profit organization for improving literacy and gender equality in education in the developing world.

That meeting changed her life.

“We came to Phuoc Lai Middle School to do a survey before providing support and Nhi appeared to be the student with the best scores among the school’s three kids who had to sell lottery tickets for a living,” Vu Thi Bich, Room to Read’s staff for supporting female students in Long An, recounted when she first met Nhi.

The organization then provided her with money to pay for school fees and a bicycle, which served as tremendous help for her job selling lottery tickets.

After years of successfully remaining one of the school’s top students while keeping her job, Nhi was encouraged by her teachers to take an entrance exam to a boarding school for gifted students in Ho Chi Minh City.

When she passed the exam with flying colors, a regular philanthropist of Room to Read offered to sponsor her tuition at both the high school and her future college.

To thank those who helped her, Nhi did her best to find a part-time job and graduate early, proving that their investment was worth it.

Despite her poverty, Nhi described her life full of luck, thanks to the help she has received from others.

After hearing about Nhi’s circumstances, the owner of the company where Nhi works decided to let her live in the office and allowed her to schedule her working time around her studies.

“My boss told me to look for a better-paid job because she could only afford that amount.”

However, the young woman insisted on working there as she wanted to repay the company and its owner for their generosity because, without them, she would never have been able to study and hold down a job.

The Mekong Delta is known for the extremely high number of female students who drop out of school, and organizations like Room to Read are working to change the mind of low-income students in regards to their outlook on the future.

According to Room to Read in Vietnam staff member Doan Bao Chau, 2,748 girls in Long An, Vinh Long, and Tra Vinh Provinces participated in the organization’s program to provide educational support for female students during the 2017-18 academic year.

“That’s just a small number compared to the need in Vietnam. We are still working to create more opportunities,” Chau said.

Ngo Thi Kieu Loan, a third-year student who studies public governance, office management and tourism at Tra Vinh University, is another female student who has received support from Room to Read.

“There was a time when I wanted to give up, but when Ms. Xuyen from Room to Read drove a 30kg bag of rice to my house so that I’d be able to eat, I told myself to keep going,” Loan recalled.

Loan started receiving scholarships when she was in eighth grade.

At that time, her mother’s health began to seriously deteriorate, preventing her from working. Meanwhile, her father’s income was too low to provide for the whole family.

From 8th to 12th grade, Loan was supplied by Room to Read’s coordinators in Tra Vinh with money to cover school fees, stationery, and food.

The organization’s staff also successfully stopped Loan from dropping out of school to find a blue-collar job once her mother was hospitalized and her family ran out of money.

Looking back on the journey she has been through, Loan admitted that holding on to school has been the best choice she has ever made in her life.

“If I had quit school then I’d be married now with children. I’d be stuck in the cycle of poverty without helping my parents or my own future,” Loan said.

During her time with Room to Read, Loan has become more confident and sociable.

After graduating from high school, Loan won a scholarship from Tuoi Tre (Youth) newspaper and has been able to continue on to college..

“I will not give up, I will give it my all,” said Loan, who still has two more years of financial challenges to deal with until graduation.

She currently works part-time at a noodle shop, earning VND10,000 ($0.43) an hour, which she puts toward her schooling.