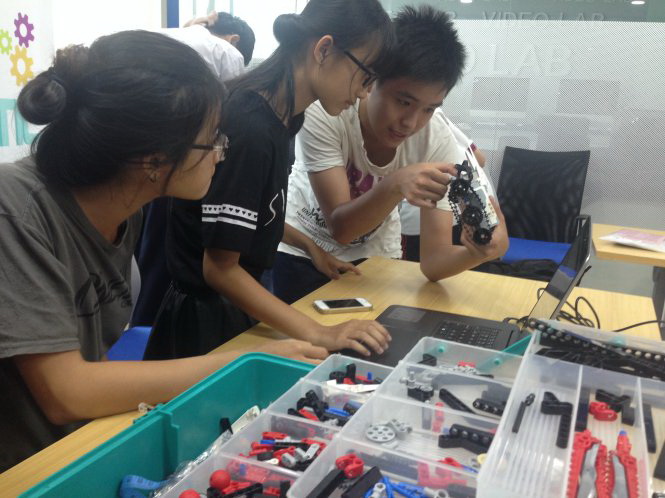 A free program is giving opportunity to those interested in robots and programming this summer.

The robotics class, held by Mindstorms Robot Club of the American Center under the U.S. Consulate General In Ho Chi Minh City, is a course dedicated to robotics fans or to those who are passionate about computer programming.

The 10-day course is open Monday to Wednesday weekly and will run until July 25.

The class has already attracted over 100 enrolments from students aged 13 to 20, however only the 20 earliest individuals can be chosen due to the limited size of the facility, said Cao Xuan Nam, lecturer in the information technology faculty of the Ho Chi Minh University of Science (HCMUS).

“The course completely piques my interest,” Phan Thuc Anh, an 11th grader said, explaining that unlike her studies at school which are mostly theoretical, the program is dynamic, with lots of practice and application.

The class is led by two lecturers from the HCMUS and two assistants, but most students tend to figure out how to create and functionalize their own creations – the robotic models – via an application installed in the classrooms computers.

After lecturers set out challenges such as to build and control a robot to maneuver around obstacles, students will form groups of three and are given building bricks and materials including remote controls, motor circuits and sensors to develop and program their models.

Those encountering difficulty along the course will be guided and supported by lecturers and assistants.

“Those who are completely new to the field can also learn with ease as the class provides robot programming lessons from basic to advanced,” Nam said, adding that students create a robot based on a given model and program it to perform basic tasks.

“They will then be familiarized with sensors and start programming the model to let it solve a given problem automatically,” the lecturer added.

“The ultimate goal of the course is to promote learners’ creativity and programming conceptualization.”