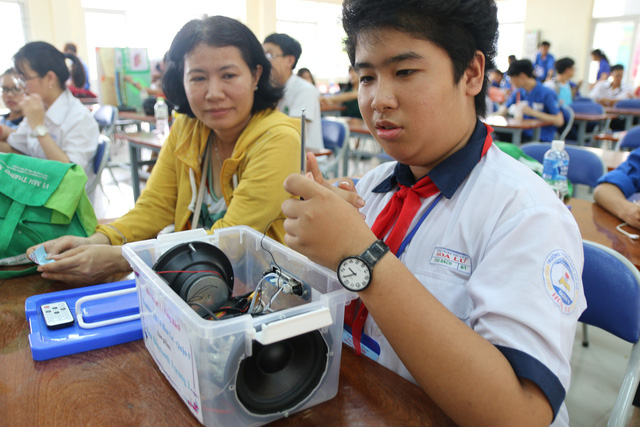 A number of surprising and practical products were presented during the final round of a local creativity competition for children in Ho Chi Minh City on Saturday.

The six-month annual contest received around 133 devices, inventions and novel pieces of equipment made by nearly 400 students aged 6-18 citywide.

A middle-schooler named Le Tung Bach won the grand prize for his versatile box-like contraption able to serve as a radio, music player and karaoke machine.

The portable device, he said, may be especially loved by picnickers for its usefulness.

The second prizes went to a set of high-rise rescue gear, paper made of lotus seed pods, toys for children with autism, and a bandage supposed to accelerate the wound-healing process.

The last product left the judges with a strong impression as it combined extracts from a succulent plant species known as aloe vera with excipients – inactive substances used as a vehicle with active ones for medical purposes.

The creator, tenth-grader Banh Nguyet Nhi, said she tried the bandage on guinea pigs, with the preliminary qualitative result showing that it was able to reduce pain and treat wounds more rapidly than the body could otherwise do.

Nhi went through the good offices of college lecturers who were also pursuing bio-bandage for injury healing.

She wished to improve the product so that it can deal with various wounds and create a fluid version of the first aid.

Excellent award-winning items are expected to make their way to a national competition slated to take place in Hanoi.