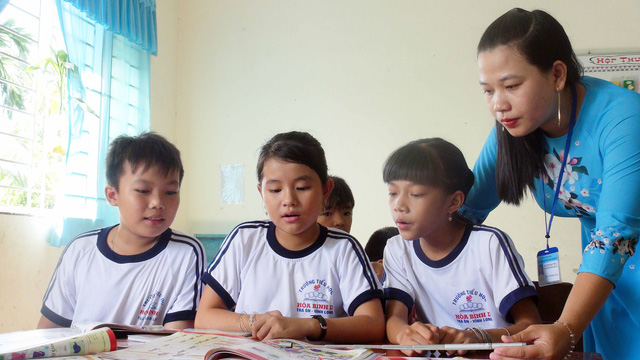 An elementary school teacher from Vietnam’s Mekong Delta has been creating job opportunities for the parents of her students to help them build a stable life and ensure a proper education for their children.

The school is located in a rural area where life was harsh and many parents could not afford education for their kids.

Thuy thought it was up to her to improve the situation by providing the locals with a decent job and stable income.

She formulated a plan according to which local parents would earn a living as industrial sewers, while she would be in charge of finding suitable partners.

The school board supported the idea and allowed Thuy to use two classrooms at their old venue as sewing workshops.

The teacher called on her friends and benefactors to raise a fund, which she later spent on sewing machines and other necessary items.

After obtaining a permit from local authorities, Thuy encouraged local parents to join her sewing team and promised them sufficient and free-of-charge training.

Many women in the rural district are now part of Thuy’s sewing team, a job that is very convenient for their daily schedule.

“Aside from our time at work, we are able to take our children to school, pick them up, and prepare meals for our families,” a resident said.

Some of Thuy’s students are less fortunate than the others as they live in households so poor that their parents could not even have money fix their roofs.

The teacher has never hesitated to help. She posted photos of such houses to Facebook and sought assistance from her friends and charitable groups.

Thuy also runs an online shop that sells fruit and honey and spends all of her profit on clothes, books, and food for poor children in the locality.

“I try my best to help the kids stay in school and give them the motivation to overcome the rough paths of their lives,” the teacher remarked.

According to the principal of Hoa Binh D Elementary School, Thuy is a young, energetic, and creative teacher who dedicates everything she has to her students.

The local educational sector has praised and rewarded the teacher for her accomplishment and contribution to the locale.