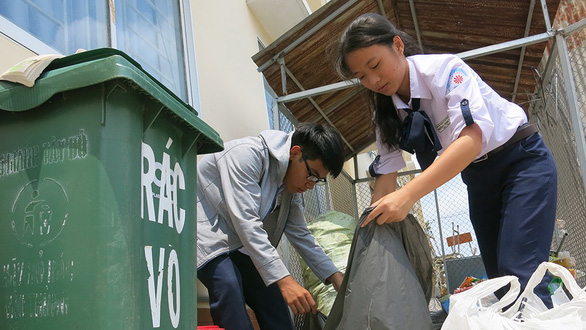 The difficulties and inconveniences of a plastic-free lifestyle pale in comparison to the positive impacts one school in Vietnam’s Mekong Delta is making on the local environment with its new zero-waste initiative.

Sorting recyclables isn’t common in Vietnam, a country known for being one of the world’s biggest plastic polluters.

Ly Tu Trong High School, located in the Mekong Delta hub of Can Tho, is doing its best to change that.

The school’s Zero Waste Club, backed by their headmaster and teachers, is dedicated to ridding the school of single-use plastic and ensuring that recyclable waste is sorted properly so it can be picked up and taken to local recycling centers.

When the school bell rings at 11:20 am each day, the members of Ly Tu Trong’s Zero Waste Club begin their “shift” – a tedious afternoon of digging through the school’s morning trash haul to sort the waste and prepare it to be sent to a local recycling center.

It sounds simple – glass in one basket, paper in another – but in a country where the concept of sorting waste hasn’t yet hit the masses, even small steps require great effort.

The first hurdle for the group was making sure the waste was being sent to the correct recycling centers because garbage trucks would simply take their separate trash and put it all back in a single bin.

“The students were discouraged and felt like no one appreciated the work they did,” said Mai Anh Tuyet, a teacher and head of the Zero Waste Club.

“We encouraged them by reminding them that if we do make changes ourselves, we can’t expect others to change either,” the teacher said.

And that encouragement has, in fact, paid off.

Now, the school’s degradable waste is picked up daily by regular garbage trucks, while its recyclable waste is sent to local recycling centers.

Milk cartons are washed weekly and then sent to companies specializing in recycling dairy waste.

The school has yet to completely ban single-use plastic products – a tall order given Vietnam’s street food culture.

“Instead, we encourage students to use plastic as little as possible,” said Cao Thi Ngoc Ha, Ly Tu Trong’s headmaster, adding that the school holds various activities to spread awareness and encourage environmentally conscious habits for its student body.

“Habits can’t be changed in just one or two days,” the headmaster said.

Ha also explained that forcing people to become environmentally might backfire, as high school students can be stubborn at times. Hence, the school chooses to educate and motivate students to voluntarily change their daily habits.

The headmaster also revealed that some older teachers refuse to give up plastic.

Ly Tu Trong High School is almost free of common single-use plastic products such as lunch containers, plastic cups, and plastic bags, while small gestures showing appreciation for environment have become the norm among its students.

Tran Thi Tu, who sells sugarcane juice seller in front of the school, said she no longer stores her drinks in plastic bottles because the students would refuse to buy from her if she did.

Instead, students bring their own containers for Tu to fill.

“I was unwilling to adapt to this change at first because it was difficult to figure out a price for each student’s different sized bottles,” she admitted.

The seller said that while she also hopes to one day sell juice without using plastic cups, she has yet to find a suitable alternative.