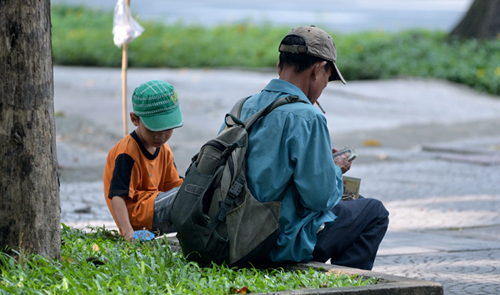 When children must work to support their families

Having no parental support, abandoned children are forced onto the street to earn money for food to survive. They are easily susceptible to risks such as sexual abuse, drug addiction, and crime.

Part 1: Child street vendors are victims of sexual abuse in Vietnam Part 2: When children must work to support their families

After being abused or committing a crime, children often believe they have nothing more to lose and do not seek help because they are weary or feel inferior. This causes them to plunge deeper into evil.

Long, 10, who hawks wares in the backpackers’ area in District 1, tells people, “I am gay.” However, the innocent boy may not understand what he is saying, as he believes any boy who has sex with a man for money is ‘gay’.

Street children in Ho Chi Minh City are not all orphans or homeless. A recent survey showed that the number of street children who have houses and families in this city is actually larger than those who are homeless.

But why do they choose life on the street? Their families are not a source of support but a burden to them. The parents of these children don’t let them go to school, but rather force them to go to work as vendors to make them money.

She has to hand over all the money she earns to her parents, she admitted.

Her parents are quite healthy but don’t work. Even worse, when Thanh was admitted into free classes at charity centers in the city, her parents came and forced her to leave the classes because ‘learning doesn’t earn money’.

Other parents from immigrant families in the city do realize the importance of education but have to make their children work because they can’t afford to support their family on their own, with the meager wages of a brick layer or street vendor.

Binh, 13, left his family in the central province of Binh Thuan to move to Saigon, hoping to find a job to support his family at home. After getting off a bus in Mien Dong (Eastern) bus station, he was approached by a male motorbike taxi driver who offered to help him find a job.

The following day, Binh was sexually abused by the motorbike taxi driver.

Some try to escape, but others accept abuse as a temporary job.

A 9-year-old lottery ticket vendor named Bao admitted he has to let a man touch his private parts on the days he can’t sell tickets.

“I’m afraid of being beaten and owing money for being unable to sell tickets, so I do it for money in return,” Bao said honestly.

Often, it is foreign tourists who approach child vendors for sex.

A small number of street vendors are abandoned by their families after they admit that they are gay. They are forced out of their homes because of their parents’ prejudices and lack of knowledge.

Other street children are the product of unwanted pregnancies of street girls aged 14-16 who must have their babies because they realize they are pregnant when they are already five months or more along. Having no capacity to raise their children safely, these “little mothers,” whose children are often the product of sexual abuse, often work as prostitutes or delve into drug use.

Many young mothers even sell their infants for a sum of money to satisfy their drug addictions.

A report of the Ministry of Labor, Invalids, and Social Affairs showed that almost 2,000 cases of sexually abused children were brought to light each year, meaning more than five children are abused a day.