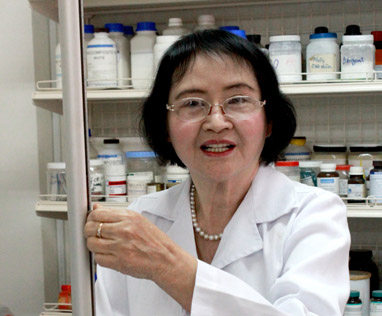 Well past retirement age, a Vietnamese female professor has devoted her life to science, particularly to the research and development of premium paint and waterproofing products.

Associate Professor Nguyen Thi Hoe, 68, is one of the Vietnamese female scientists who, in the 1990s, won the International Kovalevskaya Award for her outstanding scientific research.

The International Kovalevskaya Award, an annual accolade given to brilliant female scientists, was founded in 1985 with an initial donation from American professors Ann and Neal Koblitz.

The award has been given away to female scientists from eight countries, Peru, El Salvador, Nicaragua, Mexico, Cuba, South Africa, Mozambique, and Vietnam.

No pain, no gain

At 21, Hoe went to classes at the Hanoi University of Science and Technology together with her three children, each separated by one year.

The eldest would frolic outside the auditorium while the middle one played beneath her desk and the youngest slept soundly on her lap.

When her school was evacuated to the northern province of Lang Son during wartime, she brought her three children and continued her education there while her husband worked in another province.

Her friends erected a hut for her in which she used to raise pigs to earn some income.

After graduating in 1971, she began teaching at her university.

The house which she was granted while teaching there was old and dilapidated, its floor inundated with rainwater.

As she and her three children got soaking wet each time it rained, she realized the need for a waterproof material.

In 1975, she transferred to the Ho Chi Minh City University of Technology, where she took advantage of the school laboratory and workshop to conduct research on the production of paint.

The first batch of her paint was well received on the market. Though she sold quite a lot, she hardly made any profit as her prices were low.

When Hoe went to the U.S. to pick up her Kovalevskaia award in 1992, she noticed that the paint there was glossy and gorgeous.

She later learned that the paint they used at that time was water-based paint rather than the solvent paint used in Vietnam.

After returning to the Southeast Asian country, she sought ways to visit the U.S. again.

With only US$500, she traveled many places in search of a partner for her waterproofing projects.

During the two-month trip, she brought 20kg of instant noodles with her and slept at airports to cut costs.

After her trip, Hoe’s Kova Group, specializing in paint and waterproofing, came into being.

She established her brand in Singapore, from which Kova products were sold to six countries.

Hoe has worked 14 hours a day until now, and she wants to work more, if her health allows. She can stay in the lab for days, and even spend nights there.

Although Hoe’s company has launched several types of fire-proof paint on the market, she is keen on developing one which can withstand even higher heat.

After some 10 years of research and trial-and-error production, she discovered a new use for rice husks, which are abundant in Vietnam.

She invented a method of extracting nano particles from rice husks, which have typically been used as fuel or fertilizers.

The nano particles from rice husks have remarkably improved the quality of her nano paint compared to conventional ones.

“I think what I have now is only the launch pad for local scientists’ future innovations. Apart from passion and zeal, young people should also be set on achieving what they are after against all odds. They should also know what society needs; if they do not, their research will be a waste,” Hoe advised local youths.

In 2002, Hoe founded her Kova fund to provide support for local students and encourage their engagement in scientific research.