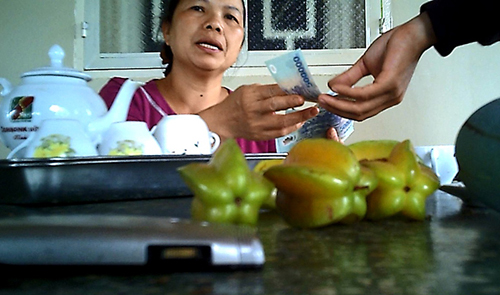 Being cheated and ‘sold’ to farm employers in remote areas of Vietnam’s Central Highlands province of Lam Dong, workers are left with only two options, either hiding in the forest to flee from labor exploitation or stretching their backs to work.

However, not many can suffer through the hard labor because of the poor nutrition of the daily meals offered by the farm owners.

While staying in the labor recruiting company Duc Hoang in Duc Trong District of Lam Dong Province and waiting for farm employers to select them, workers were once threatened by Thu, the wife of the company’s director. “Some guys tried to escape farms and were beaten more dead than alive when they were nabbed back.

“Employers in Lam Ha District [of Lam Dong] are willing to kill those who flee away.”

Henchmen of Thu added, “We are all relatives here. We are alerted if any stranger escapes and wanders around here.”

On the morning of July 1, almost 20 workers gathering at the Duc Hoang company were asked to sit in a line of chairs to wait for employers to ‘check out their legs’ and select them.

Seeing one of the workers wearing shoes, Thi, Duc Hoang’s manager, scolded him, “F**k, are you coming here to find work or to travel? Seeing you in this style, even your granddad wouldn’t dare hire you. Find sandals and put them on, immediately.”

At 9:00 am in the morning, most workers were ‘picked up’ by employers.

Tuoi Tre (Youth) newspaper journalists in the role of workers seeking a job were ‘sold’ to Thanh, owner of a farm in Dinh Van Town of Lam Ha in Lam Dong, with a promised salary rate of VND1.85 million (US$89) a month for each.

There were two jobs there, tending to a herd of 1,000 pigs and doing the gardening.

Thanh informed them that he needed new workers to replace two others who would stop working for him soon.

Thanh even added, as if to threaten newcomers, that one of the two who were to leave would remain working for a month to deduct the VND1.85 million he had initially spent buying him from the Duc Hoang company.

After half a day, the journalists were too exhausted to continue doing the job of clean-up, feeding pigs, and harvesting lemons at the farm. The men told the farm owner Thanh about their idea.

“It’s normal if a worker stops working after a couple of days. Some even accepted paying ransom for being unable to continue,” Thanh said.

Thanh asked the men to pay VND100,000 ($5) to be carried back to the labor recruiting company Duc Hoang and pick up others for replacement.

At Duc Hoang, Thi and Thu began arguing, “Tell your relatives to bring the ransom of 1.85 million dong here to go home.” Also at Duc Hoang, workers have to pay for their food themselves.

The ‘workers from Tuoi Tre newspaper were later ‘sold’ to Thuy, owner of a coffee farm in Buon Chuoi Hamlet in Me Linh Commune, Lam Ha District.

At the new farm, Thuy ordered all workers’ mobile phones and ID cards be kept and asked each to pay VND450,000 ($22) as a security to prevent them from escaping.

“It costs me several million dong to buy each of you. I’d rather be careful,” Thuy said.

The farm raises chickens and all of the poultry that died of diseases at night is used as meat for workers.

On the following day, when several men also asked to stop working at the new farm, Thuy shouted, “You are so annoying. Pay me 1.85 million dong to go.

“I won’t let you go now. I will return you to the company. They will sell you again so that you give up trying to leave.”

Tuoi Tre journalists could only go away from Thuy’s farm after secretly borrowing a mobile phone and calling colleagues to pay the sum Thuy demanded.

Hiding in the forest

Thuy’s farm has some 20 workers from the countryside.

Hours before, two workers had fled away from the farm by sneaking into a nearby forest to hide away from the hard labor at the farm.

A worker named Lam at the farm revealed that, “Two guys offered to sell their phone for VND500,000 [$24] to go away. But no one here has that amount to buy it. But they still go.”

Thuy sent her henchmen to catch them at all possible escape points. However, no news about them has been heard.

“I’m just afraid that they get lost in the forest and starved to death. They may be beaten to death if they are taken back,” Lam noted.

Lam also revealed that he has seen seven or eight workers of the farm leave that way into the forest.

At Thuy’s farm, Tuoi Tre journalists had a talk with a fellow worker named Luong Van Thiet, 16, from central Thanh Hoa Province. He was sold to Lam Dong when he was only 14 years old.

“I got used to the heavy work here so I don’t see it as so heavy now. I am trying to pay all my debts and save a sum to go home by the end of this year,” Thiet talked about his hopes.