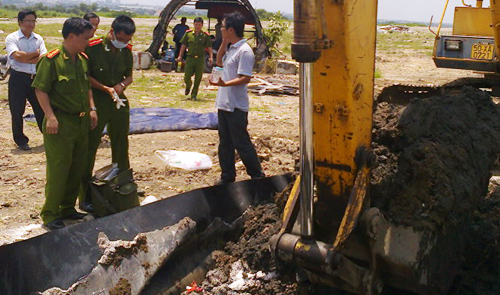 Despite warnings about the severe level of soil contamination in Vietnam, no proper steps have been taken to determine how bad the situation is and detoxify the land, especially farming and industrial land.

According to experts, Vietnam has been completely unable to control land pollution, especially with wastewater from families and factories – notably in the fields of textile, dying, and tanning – being directly discharged into rivers.

The dumping of industrial waste by factories, which is illegal but still common, has caused extensive soil contamination, thus reportedly causing cancer and other health problems for people living nearby.

Since it cannot be detected without special equipment, soil contamination has yet to attract appropriate concern from the public, according to Deputy Minister of Natural Resources and Environment, Bui Cach Tuyen.

“I can confirm that soil contamination in Vietnam has reached a serious and alarming level that threatens the living environment and human health,” said Tuyen.

“The risks from soil contamination will be exposed soon.

“Many sectors in Vietnam have developed at the cost of soil contamination, such as mechanics, chemical production, mining, farming, hotels, and golf courses.

“They have added to the pollution of soil,” Tuyen added. Dr. Nguyen Dang Nghia, director of the Southern Center for Soil, Fertilizer and Environmental Research, said that soil contamination is the end result of air and water pollution because most pollutants filter down to the ground.

Such pollutants as dust and smoke hang in the air and mix with rainwater to create acid rain. This acidic water is then absorbed into the ground.

“However, data on soil contamination is often extracted from outdated scientific reports. It shows that the issue has not received proper attention,” Dr. Nghia stressed.

The severity of soil contamination is also manifested in the widespread presence of salt, alum and dioxin in soil across Vietnam, Nghia said.

However, the Southeast Asian country has ignored the issue. Elsewhere in the world, developed nations have set up funds to restore land and control soil contamination.

Individually, farmers have begun to limit the contamination of soil by refusing to use industrial products such as fertilizers and pesticides.

Farmers in Nhut Thanh Hamlet of Thanh Hoi Commune, Tan Uyen Town in the southern province of Binh Duong are pioneers in restoring the balance of the environment.

Huynh Phi Phung, who has used biological fertilizers for two years, said, “Formerly, I just used chemical fertilizers on my crops. They grew well, but my land became hard and less healthy over time.”

Using biological fertilizers has led to higher vegetable and crop yields, Phung noted. Furthermore, he needs less of the substances year after year because the soil naturally improves with better humus and fertility.

More and more farmers in Thanh Hoi have turned to microbiological fertilizers.

Cao Hoang Minh, chairman of the farmers’ association of Thanh Hoi Commune, said, “Farmers here are learning about the consequences of soil contamination from using chemical fertilizers and pesticides.

“What we are worried about is that we don’t have a good kind of pesticide.

“We hope the government will introduce more regulations on the use of chemicals and chemical fertilizers and pesticides in farming so that we can both contribute to the protection of the soil and compete with one another fairly.”