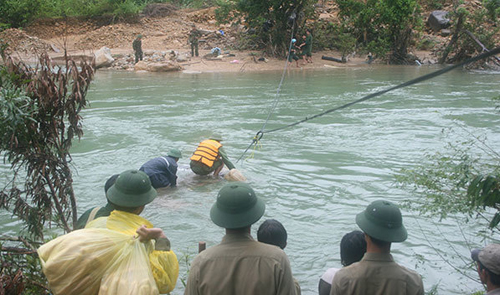 Being ready for both combat and civil rescue jobs is the duty of the 270th Engineer Brigade assigned to the Fifth Military Zone stationed in central Vietnam.

Headquartered in Quang Nam Province, the unit has carried out different campaigns to rescue locals in the natural disaster-prone region.

Strong storm, floods and bridge collapses are the ‘working environment’ of the members of the brigade.

Committed to saving people in distress, the unit has gained confidence and love from local residents.

Many who were rescued admitted that they owe the unit’s soldiers a debt that is unable to be paid off – the debt of life.

The brigade has a special engineering battalion which is formed for rescue jobs in any situation, such as crossing swift rivers full of hidden rocks, repairing broken bridges, and coping with flash floods.

Lieutenant Nguyen Tien Oanh said while wiping sweat from his forehead, “I am used to exercises like this. All unit staff must be healthy to be ready for our hard work.”

After 11 years in the army, Oanh is one of the most outstanding speed boat drivers of his unit and he knows all the dangerous river sections in the region like the back of his hand. It can be the deep water upstream on the Thu Bon River, the hollow area of the Tra Khuc River, or the sharp bend of the Huong River.

He remembers every site with rocks hidden below the water.

In November last year, when the central region was hit by a severe flood, areas of Quang Nam and Quang Ngai Provinces were under water.

Oanh was assigned to drive a speed boat to rescue people at 10:00 pm in Nghia Dong and Nghia Phuong Districts.

“My small boat had to pass between the houses and trees of every local hamlet in the districts at midnight.

“In the total darkness, the headlight of the boat was almost useless under the thick curtain of rainwater pouring down,” he recalled.

Swift water currents threw the boat into walls and trees as if the water were about to swallow it, he added.

“If the boat had sunk, I am not sure I could have survived, but all the children and elderly people aboard would have lost their lives.

“The psychological pressure forced me to focus my brain and strain my eyes to work,” Oanh said.

The following morning, the duo drove over four tons of relief goods to distribute to locals.

But the mission was not as dangerous as when Oanh crossed the swift flowing Dak Mi River, which was rising with floodwater, to join a rescue of 18 men in 2009.

The 18 men were gold diggers working deep in a forest when a flash flood suddenly struck them. They survived by holding onto a big tree branch the whole night.

The 270th Engineer Brigade received the news and assigned a team to the site for rescue.

“The Dak Mi River is 50m wide with many hidden rocks and rapids.

“The motorboat had a narrow passage to cross.

“Just one mistake could lead to the boat capsizing, and all aboard would be plunged into the fast running water.

“Then, I was driving my leader, Major General Le Chiem – deputy commander-in-chief and head of staff of the Fifth Military Zone,” Oanh noted.

With the assistance of helicopters, they safely rescued all 18 men.

Senior Lieutenant Colonel Pham Xuan Thi, chief of staff of the 270th Engineer Brigade, who has spent decades serving the army, said his unit is on permanent duty for civil rescue missions in the rainy season when flash floods and storms may suddenly strike anywhere.

“We follow weather forecast reports and are ready for rescues.

“Vehicles, motorboats, food and medicine, and other equipment are all ready for any mission,” Thi said.

The unit is always ready to conduct rescue missions in any corner of the central region, from the border to the deep jungle.

Also in 2009, his unit was alerted about a gold mine collapse threatening 11 workers who were underground, and his troops were dispatched for a rescue mission during the night. The incident took place at the Ma Stream in Bac Tra My District of Quang Nam.

The brigade had to dig soil and turn up each rock to find bodies because no machine could access the site, Thi recalled.

Even worse, rainwater kept pouring down and hundreds of soldiers and army officials had to work under the threat of a possible flash flood.

“Seeing tired soldiers with their hands scratched and bloodied was an ordeal, but we couldn’t stop when the rescue was not finished.

“Because people laid all their confidence on us soldiers, we had to fight for that,” Thi recalled.

Major Dao Sy Thinh, head of the 25th engineering battalion, added his staff is trained to meet the demands of different types of terrain in the region.

The battalion’s engineering units master each corner of the field they are in charge of, he confirmed.