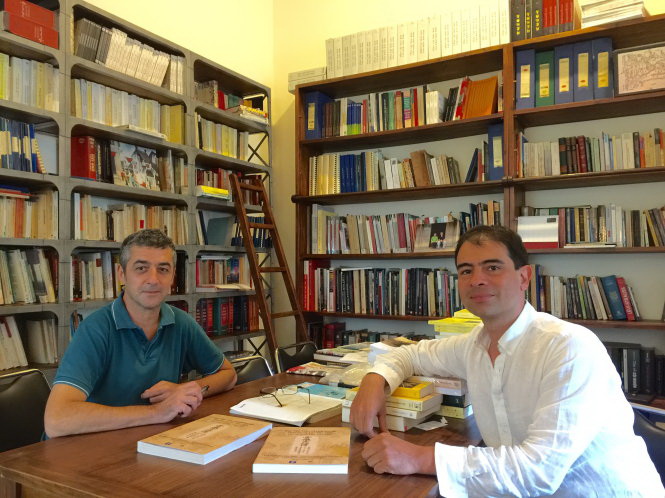 Two French experts on Vietnam have worked over the past two decades to shed light on the best of Vietnam’s language and culture.

Housed in a plain French-style mansion on Hai Ba Trung Street in District 1, the Ho Chi Minh City branch office of the École Française d'Extrême-Orient (French School of the Far East) (EFEO) is a stark contrast to the city’s hustle and bustle.

The French institution has focused on conducting extensive research on contemporary Vietnamese culture, alongside related academic studies, since resuming operations in Vietnam in 1993 after a 36-year hiatus.

French anthropologist Olivier Tessier, 50, head of the EFEO’s Ho Chi Minh City branch, spends much of his time poring over books from his library of notable Vietnamese works.

Tessier spoke in almost flawless Vietnamese during an interview with Tuoi Tre (Youth) newspaper regarding his work in Vietnam, though a traumatic head injury forced him to re-learn the language a few years ago.

He shared that he worked as an irrigation engineer before switching to anthropology in 1993, when at the age of 28 he took an internship trip sponsored by his university to the northern Vietnamese province of Phu Tho, with GRET, a French non-governmental organization combating poverty and inequality that was looking to place an irrigation engineer in the area.

Tessier later completed his doctoral program on Vietnamese village space under a three-year grant from the French government in 2003.

He spent the next three years working on projects conducted by universities in France and Belgium before taking a job with the EFEO in 2006.

Aside from a rewarding profession, Tessier’s two-decade bond with Vietnam has blessed him with a Vietnamese wife and two sons of dual nationality.

One particular notable work published by Tessier is a photo collection of the UNESCO-recognized Imperial Citadel of Thang Long in Hanoi during the 19th and 20th centuries which earned him a Bui Xuan Phai – Vi Tinh Yeu Ha Noi (Bui Xuan Phai – For the Love of Hanoi) award in recognition of his notable contributions to the country in 2012.

“I feel greatly blessed to come here [Vietnam], and really love what I’ve been doing so far,” Tessier said.

Bordeaux graduated with a degree in history from Paris Diderot University, also known as Paris 7 University, in the 1990s amidst celebrations of revived ties between Vietnam and France.

“I decided to research cultures outside of Europe, and took up the Vietnamese language to facilitate my in-depth study of Vietnamese culture and history,” Bordeaux explained of his impeccable Vietnamese with a pronounced southern accent.

“I always yearned to spend time with Vietnamese farmers for hands-on experiences with their rustic lifestyle, religion, and agricultural production practices,” he added.

After successfully defending his doctoral thesis on Hoa Hao Buddhism, a religious sect founded in 1939 by a Mekong River Delta native in southern Vietnam, Bordeaux began working as an assistant professor at the Paris Practice Graduate School in 2007.

Though he carried out extensive research into the Southeast Asian history, his primary focal point has always been Vietnam.

The expert, however, did not fully ‘tie the knot’ with Vietnam until 2012 when he became involved in a joint project between the Paris Practice Graduate School and the EFEO to re-launch the latter’s office in Ho Chi Minh City.

“We marked the reopening of the southern office with a project to repatriate the French illustrated version of a noted poem-story titled ‘Luc Van Tien,’ a Vietnamese literary heritage and one of the EFEO’s long-standing pursuits,” Bordeaux explained.

The masterpiece is among the most recognizable and influential epic Vietnamese poems.

The poem narrative was translated into French by noted translator Abel des Michels in 1864.

In 1899, Gibert gave the EFEO the book and it was subsequently stored in the institute’s archives before going unnoticed for decades.

The tome was not rediscovered until 2010, when Vietnamese professor Phan Huy Le visited the EFEO in France and rediscovered the masterpiece.

Prof. Le is a former chairman of the Vietnamese History Association and was named an Honorary Doctor by the EFEO in France in May 2016.

“‘Luc Van Tien’ is our most significant project so far and no studies have been conducted on the Luc Van Tien colored paintings,” Bordeaux noted.

Bordeaux and Tessier are currently conducting collective research projects on irrigation and water issues as part of a joint effort between the French Institute of Research for Development (IRD) and the EFEO.

One of these projects focuses on further developing Dau Tieng Reservoir in the southern province of Tay Ninh and another reservoir which supplies water from the Be River to Tay Ninh, Ho Chi Minh City, and other neighboring provinces.

Bordeaux added that he is also researching Mekong Delta civilizations’ reliance on rivers and canals during the Nguyen Dynasty (1802-1945), the country’s last monarchy, as well as the history of Protestantism in Southeast Asia and modern religions in general.