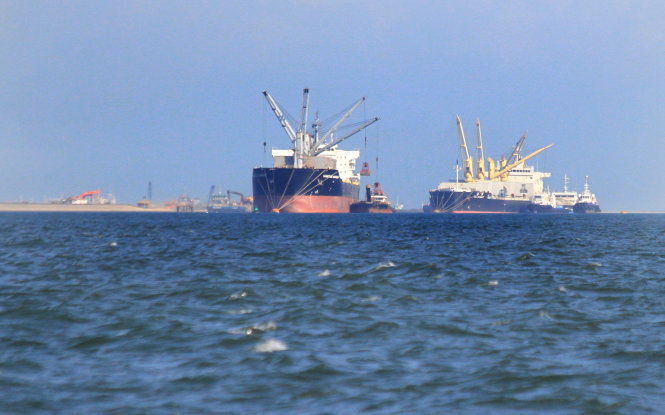 Tracing Vietnamese ‘sand drain’ to Singapore – P2: How much does the resource cost?

After discovering where sand dredged from Vietnam’s waters is being transported to in Singapore, Tuoi Tre (Youth) newspaper found that the precious resource is being sold at rock bottom prices, at least according to customs papers.

Like some Southeast Asian countries, Vietnam bans the export of sand, with the exception of saline sand, resulted from river or sea dredging projects.

According to data reviewed by Tuoi Tre, more than ten businesses across Vietnam have obtained a license from the construction ministry to export saline sand since 2016.

These companies are those that have carried out various river or sea dredging works, and have been allowed to sell the dredged sand to recoup expenses.

However, Tuoi Tre has found out that these companies seem to have sold the nonrenewable resource at an average price of only US$1 per cubic meter, and in some cases, as low as $.01 per cubic meter, according to customs declarations.

In the Mekong Delta in southern Vietnam, only one project on Phu Quoc Island, off Kien Giang Province, was recorded.

Khanh Hoa and Phu Yen each were home to four dredging projects, with one project in Khanh Hoa having exported more than 7.3 million cubic meters of sand to Singapore.

In 2014, BKG and Quoc Bao declared to customs that their sand exports cost $2 per m3 while Phuong Thao Nguyen Co declared $2 per m3.

In the meantime, Kien Hoang and Binh Minh Vang asked for even more shocking prices: the former sold to Le Tong Resources at $0.8 per m3, and the latter to Ky Tuong Singapore at $0.9 per m3.

These exporters asked for similar rates for contracts signed in 2016 and early 2017, according to documents seen by Tuoi Tre.

Sand bought from Vietnam is seen at an area near Changi Airport.

Despite the throwaway prices, Vietnamese businesses sold a total of 31.6 million cubic meters of saline sand in 2015 alone, accounting for 50 percent of the total sand exports between 2008 and 2016.

Many construction companies have expressed skepticism at the dirt cheap export prices, saying it is impossible to sell the resource for less than a dollar per cubic meter.

One industry insider said he was forced to buy saline sand for $1.2 per m3 to use in a land reclamation project, so it is illogical for the export price to be cheaper than the domestic rate.

The exporters have apparently declared the export price much lower than the real rates when completing customs paperwork, according to Tuoi Tre investigation.

For instance, in May 2015, Vietnam’s Hai Duong KG signed a deal to sell sand dredged on Phu Quoc Island to Cambodia-based JIA DA Investment & Construction for $4.4 per m3, according to the contract obtained by Tuoi Tre.

However, Hai Duong KG only declared an export price of $1 per m3 to customs when they started to send four sand-loaded ships to the customer in October and November 2015.

The customs department had indeed marked those shipments as ‘suspicious’ and ‘needs reviewing,’ however, the exports still eventually cleared checks and were successfully transported to the buyers.

Among the suspicious customs declarations is that of Duc Long Co., which said it sold two ships of sand to Singapore’s Hua Kai at only $1.3 per m3, even though the contract, obtained by Tuoi Tre, shows the price was $4.6 per m3.

On February 20, Tuoi Tre visited the office of Hua Kai on the fourth floor of an office building on Balestier Street, and was received by a woman who preferred to stay anonymous and a man. The woman claimed to be the company’s general manager.

Tuoi Tre gave her a copy of the contract her company had closed with Duc Long on July 30, 2014, with the sand export price set at $4.6 per m3 and asked her about the low price the exporter declared with customs.

However, the general manager quickly refused to comment, saying this is something she could not disclose.

She did confirm the contract was authentic, and that Hua Kai had bought two ships of sand from Duc Long before signing a new contract in 2016.

But the woman refused to disclose the buying price in the new deal.

On February 27, Tuoi Tre asked to have an appointment with Duc Long Co. leaders, but has yet to receive a response.