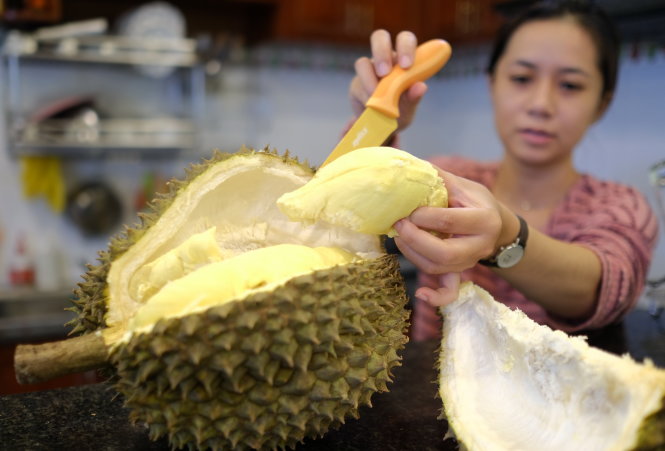 Durian growers in the Central Highlands province of Lam Dong have vowed to steer clear of toxic chemicals and instead adopted innovative production techniques in recent years.

Among the 1,000 durian growing households in Da Huoai District, approximately 150 kilometers from Da Lat, only fruits produced by 15 qualify for the registered ‘Da Huoai Durian’ trademark.

All 15 of these growers, who hail from Cai Lay District in the Mekong Delta province of Tien Giang, have settled in Sinh May Village in Phuoc Loc Commune, for more than 15 years.

Tien Giang is one of southern Vietnam’s largest fruit growing regions, dotted with orchards producing a wide variety of fruit.

Nguyen Van Tam, a 56-year-old farmer, recalled an occasion last year when a district official posing as a trader attempted to talk them into selling him green durians.

The farmer repeatedly refused the offer for fear that the trader would douse their fruits in toxic chemicals to expedite their maturity.

“We normally pick the fruits 10 days before they ripen on trees. If we collect them prematurely and soak them in chemicals, consumers will discover the truth and boycott our products,” Tam explained.

“It will seriously hurt our reputation and business. I might as well chop off my own legs,” he continued.

Tam also remembered the time when he and around 10 others left Cai Lay for the first time and then set foot on the sparsely inhabited area, which later earned its name, Sinh May, for its omnipresent sludge and rattan.

Having spotted durian trees along the road, the men decided to settle at the site, where they have since cultivated crops as they had done for generations before.

The early settlers encountered immense difficulties, including plodding back along 10 kilometers of muddy path from Cai Lay, with the seedlings sourced from there on their back.

While the first crop yielded a limited number of fruits which had a sweet flavor but were small in size, the dedicated farmers traveled back to their hometown for more seedlings and techniques to graft new varieties, Tam further recalled.

Among the over 2,000 hectares of land dedicated to growing durians throughout the district, only 40 hectares owned by Sinh May growers can yield fruit that meets VietGAP standards.

VietGAP, or Vietnamese Good Agricultural Practices, is a set of principles used for sustainable and safe agricultural production approved by the Vietnamese government.

Tran Kim Truong, from the Da Huoai Division of Agriculture and Rural Development, confirmed that durians grown in Sinh May boast the district’s highest yield.

Truong said that three years ago, local growers insisted that the district’s agricultural officials register for an exclusive trademark to prevent people who grow or sell other varieties from claiming that their fruit had been grown in Sinh May, damaging their reputation.

However, when the district managed to secure a registered trademark one year later, most farmers procrastinated as they wished to be best prepared before applying for the certification.

They only obtained the certification earlier this year.

“They set a good example for other growers to follow. We’d like to encourage farmers and traders to grow produce responsibly and sell items honestly,” he added.

On harvest days, garden owners or farm hands are seen meticulously selecting each qualified fruit and attaching the exclusive logo of Da Huaoi Durian Trademark on the stems before they go to the market.

With the establishment of the exclusive trademark, consumers are assured of the fruits’ quality, while growers earn better profits.

Despite having two to five hectares to tend to, households in Sinh May still enjoy a leisurely pace of life.

Tam revealed that he and his peers had all adopted remotely activated watering and fertilizing systems.

In a brief demonstration, the veteran farmer sent a text command on his mobile phone, and a few seconds later, the watering system was activated, with water pouring from above onto the trees.

Nguyen Hoang Van, another farmer, said that he had just triggered a similar system to fertilize his crops while he was away.

He added that the entire system had cost him the equivalent of three hectares of durians.

“The system cost an arm and a leg, but it works to save our energy,” Tam noted.

To visitors’ surprise, weeds in durian orchards in Sinh May are not cleared but kept knee-high.

Hai Chau revealed he had learned from a training course that weeds retain moisture and humus, thus enriching soil and shielding the trees from drought.

At the end of the crop seasons, all they need to do is add microorganisms to the soil and scatter lime to keep harmful bacteria at bay, minimizing the use of pesticides.

Chau added that other farmers did not buy his words until his high yields and minimal use of fertilizers, weed killers and insecticides proved him right.

An innovation to freeze low-priced durians devised by Pham Van Duoc, a 42-year-old farmer, has saved Sinh May growers from being hurt by low prices fixed by traders over the past three years.

After applying his formula of freezing and thawing durians on a trial basis, Duoc spent nearly VND400 million (US$17,394) building a processing plant with a modern sterility room, a freezing system and a chilling section.

He collects durians from local growers and processes them before selling the unseasonal fruits to outlets in Hanoi and other localities across the country for better prices.