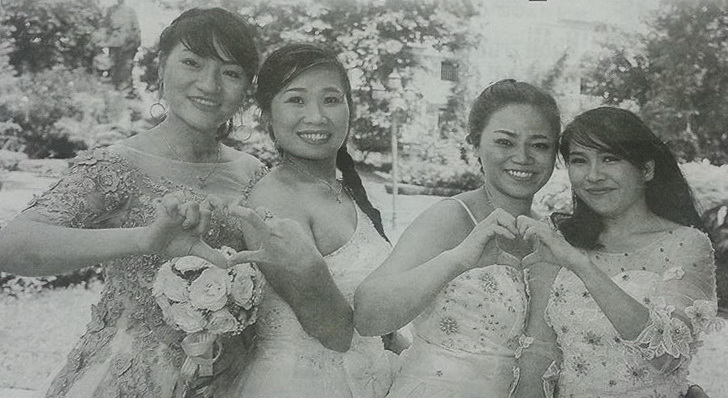 The Dream of Happiness Day, an event where single moms can get together to share their stories and have the chance to wear wedding dresses, is scheduled to take place in Hanoi this Sunday, following successful launches in Da Nang and Ho Chi Minh City.

Interestingly enough, the meaningful event was initiated not by a single mom, or a woman, but a young man.

In 2012, the young man noticed that a woman opposite his house lived only with her child and was shy at having contact with other people.

Y later knew that the woman was a single mom and his desire of helping people of similar circumstances grew up on him.

Y decided to found the “Singlemum group” shortly after, and has since patiently posted new articles day after day with the hope to spread awareness and help other unfortunate single moms.

The group currently has more than 14,000 members and becomes a popular place where single moms can share their stories, opinions, advice, and experiences.

Tran Thi Thu Ha, who runs a bridal shop in the central city of Hue, is a single mom of three. Ha had never worn a wedding dress in her life until the day when a trainee in her shop asked her to be model for a make-up skill practice.

At that very moment, Ha felt so emotional and wished that other single moms like her can also have the chance to wear a wedding dress in their life.

Already knowing of “Singlemum group”, Ha then contacted its founder Y and the two have worked together to organize the event “Dream of Happiness” where single moms can have the chance meet up in real life, and especially to put on wedding dresses.

“Dream of Happiness” was first organized on August 20 in the central Da Nang City with 60 single moms. A song named “Troi sang” (Bright day) has been written specifically for single moms.

Following the first success, another “Dream of Happiness” day was organized on October 1 in Ho Chi Minh City with more than 100 single moms.

The third event is slated in Hanoi this Sunday.

Ha plans to organize several more charity events in the future to raise funds to help single moms and their children.

She also wishes to have more funding to give scholarship to children of single moms who achieve excellent academic records.

A survey carried out by the Hanoi University of Social Sciences and Humanities has indicated various reasons why single moms decide to stay single.

There are 285 single moms in the north-central Nghe An Province participated in the survey.

Of 285 participants, 22.4 percent of them chose being single as they could not find a suitable partner, want to live independently, or because of their disability, while 22.5 percent said they are too old to get married again.

In Vietnam’s society, most single moms often have to face discrimination from their neighbors, co-workers, friends, and even family members.

A sociology expert advises that the Vietnamese society should have an open and compassionate attitude towards single moms and their children.

Woman having unexpected pregnancy and being abandoned by their partners often holds hatred towards people and this will have a bad influence on their children.

“They should be more sympathized with by the society,” Nguyen Ngoc Lan, a psychology expert in Ho Chi Minh City, said.

Be sells vegetables to raise money for her neighbors in need