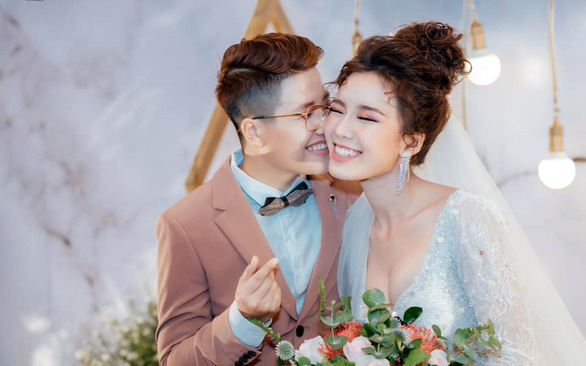 A transsexual man and his wife have been inspiring people of the LGBT (lesbian, gay, bisexual and transgender) community in Vietnam to follow what their hearts desire with a fairytale-like love story that ended with a wedding.

Young movie director Nguyen Duong, known as YunBin in show business, decided to get married to Tu Tri, the runner-up of a singing competition, in July after a year getting to know each other.

Tu Tri had been a huge fan of her husband since his impressive role in 'Trai Cam' (Forbidden Fruit), a famous Vietnamese sitcom for teenagers about members of the LGBT community.

The female singer finally had a chance to meet her idol in the flesh after four years admiring him from afar, when she joined in a film casting call for a movie directed by YunBin.

When she saw him for the first time, Tu Tri went out of control due to excitement, which captured the attention of YunBin.

They later exchanged phone numbers, hung out and got to know each other until they both acknowledged the impact each of them has on the other after their trip to the beach city of Vung Tau.

“At that time, I knew for sure that we were meant for each other,” Tu Tri said.

Tu Tri decided to move in with YunBin’s family after a month together and helped his mother with the housework, while taking good care of him as if they were officially married.

They introduced each other to their respective families and luckily received a lot of support from both, regardless of their sexual orientation, which was a relief to YunBin and Tu Tri.

However, the young couple encountered a huge threat just a week before their wedding ceremony, when Tu Tri’s parents suddenly demanded the cancelation of the wedding due to harsh pressure from social critics, as same-sex love is still perceived as an ‘abnormal relationship’ by the public.

YunBin felt completely disappointed and even thought of running away, but it was the love and understanding of Tu Tri as well as support from her grandfather that helped him overcome all hurdles to enjoy their wedding last July.

“We haven’t heard any opposition to or negative comment on our love ever since,” Tu Tri expressed her relief.

They also created a YouTube channel named 'YunBin Tu Tri Official,' showcasing Tu Tri’s music products as well as videos of their daily life activities to encourage members of the LGBT community to keep moving forward despite prejudice from others, which got over a hundred thousand subscribers.

“Many viewers of our channel, especially members of the LGBT community, told us that we were a real source of inspiration for them,” Tu Tri said.

Vietnam’s legislature passed the amended Law on Marriage and Family in 2014, which neither bans nor recognizes same-sex marriage in the Southeast Asian country.