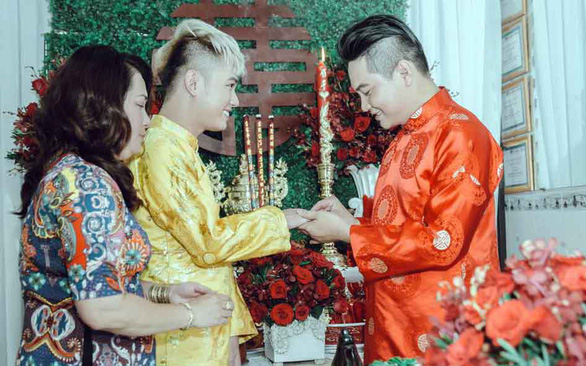 A well-known Vietnamese couple in the LGBT (les, gay, bisexual and transgender) community decided to get married three years ago, despite family opposition, to champion same-sex love right.

Tung Van Luu Khiet and Huynh Tien Dat met on a field trip for the LGBT community held in the central city of Da Nang and gradually developed feelings for each other after spending time together.

After the romantic love confession on their flight back to Saigon, they started dating and received a lot of support from colleagues as well as friends, leading to Dat’s decision of marriage proposal in May 2016.

“I was walking along the beach when I saw him there along with the ‘Will you marry me?’ phrase written on the sand,” Khiet recalled the precious moment when Dat proposed to him.

Dat is leader of ‘Sac Mau Cuoc Song’ (Colors of Life) group, a place for sexual orientation and healthcare for the homosexual and transgender.

“We had been fighting for others’ right, and I thought we deserved it, too,” Dat shared about the wedding announcement.

Their love was a big encouragement for people in the LGBT community to fight for themselves to have the right to love and marry.

But both Khiet and Dat didn’t have the nerve to invite their parents on the wedding day due to prejudices of former generations.

“It still hurts me deeply that I didn’t get to see my parents on my special day,” Khiet expressed his regret.

Vietnam’s legislature passed the amended Law on Marriage and Family in 2014, which neither bans nor recognizes same-sex marriage in the Southeast Asian country.

The couple have stayed together through ups and downs in a small apartment in the city center for the past three years and earned a living by making a beverage from ginseng and other healthful herbs, using an exclusive recipe by Khiet.

They later received acceptance from both families and tried their best to take good care of each other’s parents to prove their decision of getting married is right.

Talking about their marriage life in an interview with Tuoi Tre (Youth) newspaper, Khiet said that they had encountered several quarrels due to different characters and misunderstanding, but they soon worked things out and learned to accept their partner’s flaws.

“Understanding is the key to every happy relationship,” said Khiet.

“Their wedding is proof that love is always right regardless of your sexuality,” said Nguyen Nam Phong, a close friend of Dat and Khiet.