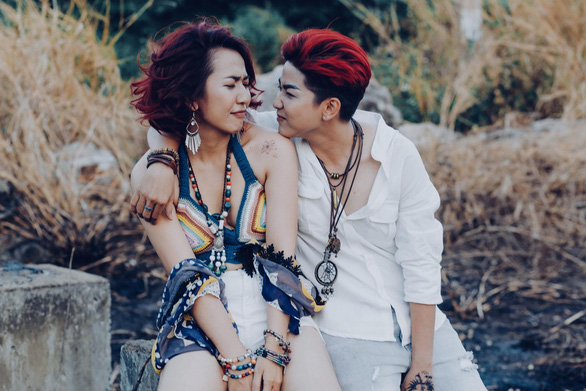 A Vietnamese transgender man made a romantic marriage proposal to his girlfriend on a TV show for the LGBT (les, gay, bisexual and transgender) last January, a happy ending after the hardest time of their lives.

Kay Nguyen has been a famous tattoo artist among local youngsters for the past two years and also the owner of a small studio in Ho Chi Minh City where he met Bich Ngan, a cool office worker who fell in love with him at first sight.

Unlike any other couples, Ngan was the one who made a move and tried every way from texting Kay on social network to delivering food to his house just to win the handsome transgender man’s heart.

She even came to Kay Nguyen’s house to help his mother with the shopping and cooking, as well as took good care of his puppies, which he later felt impressed and they began talking and getting to know each other.

“Ngan also captured my attention at first sight, but I wanted to take things slow,” Kay shared about his acceptance after Ngan’s three-month effort.

Kay and Ngan both faced serious love incidents in the past due to the same fear of coming out to others, especially their families, about who they really were.

Bich Ngan once dropped out of the university to follow her first same-sex lover and ran away from home due to overload pressure from her parents, but she later realized that her love didn’t work out as planned and found her way back home.

“I wish I had listened to my parents so they wouldn’t be so disappointed about me,” Ngan expressed her regrets about the old mistake.

On the other hand, Kay had lived ten years forcing himself to live as a girl and maintain a relationship with a guy in misery.

During that unhappy relationship, Kay fell for a girl, who forced him to choose between her and the guy he was dating.

Under the huge pressure of love Kay even made an unsuccessful suicide attempt, after which he got himself together and decided to come out to his parents.

Kay said this decision was the wisest he had ever made in his life, which spared him a chance to meet Ngan.

Their love story had been a great inspiration for people in the LGBT community.

Kay finally had a chance to propose Ngan to be his wife on a well-known Vietnamese TV show named “Come Out”, where the homosexual got to confess their real gender to the public as well as their families.

“He suddenly got on his knee while holding a ring and asked me to marry him,” Ngan recalled the precious moment in tears of happiness.

Ngan brought a new wind into Kay’s life and their house has been full of happiness as well as laughter since their marriage as Kay’s mother was really fond of her daughter-in-law.

“After every rain comes a beautiful rainbow,” he described Ngan as the light that saved his dark life.