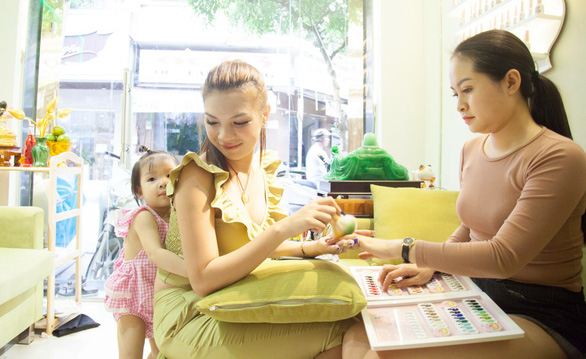 A Vietnamese transgender woman, who won a beauty LGBT contest in 2016, is leading a happy life with her husband and their adopted daughter after overcoming many obstacles from his family due to her gender identity.

Nguyen Su Yen Mi and Nguyen Van Hieu together wrote a beautiful and impressive love story that made a big impact on other people, especially those in the LGBT (les, gay, bisexual and transgender) community in Vietnam.

Mi and Hieu knew each other in a Vietnamese online game as the captain as well as vice-captain of their team and eventually turned their ‘comradeship’ into love after cooperation in games and casual small talks.

As she realized Hieu’s sincere feelings towards her, Mi decided to confess to him about her sexual orientation and gender identity: she was born a man but wants to live as a woman.

The revelation came as a huge shock to the man and they got into several quarrels at that time.

Mi felt so discouraged that she offered him an officially breakup and got his immediate refusal as he wanted to visit her in Ho Chi Minh City, a destined trip that made him realized the importance of Mi in his life.

“I no longer care about her gender, I’m just in love with this woman,” Hieu expressed his love for Mi after his visit to her family in the southern metropolis.

Mi made a decision to travel to Thailand and completed her transgender procedure while Hieu came back to his hometown in the northern province of Hung Yen after a year moving in with Mi in Saigon to handle rumors about his relationship with a so-called ‘abnormal’ woman.

“I struggled to work things out with my family, but Mi’s determination gave me strength to go against social critics and fight for our love,” he said.

Their love encountered the biggest challenge when Mi visited Hieu in his hometown and finally came out to her husband’s family members and relatives.

Their marriage immediately got strong opposition from Hieu’s parents and they did everything from giving Hieu mental pressure to forcing Mi to come back to Saigon alone to tear them apart.

“The objection was so intense that we decided to run away from his family and started our own,” Mi recalled the terrible incident.

In Ho Chi Minh City, the couple began to settle their life by adopting a baby girl and opening a manicure salon, which is now their means of making a living.

Mi said that Hieu is far from her ideal man in terms of appearance and health condition, but he still took good care of her family and gave her mental support for the past few years.

Last Valentine’s Day, she was taken aback by Hieu’s gift of jewelries with the phrase “I love you” printed in different languages.

“He may seem like an aloof person, but his heart made of pure love completely melts mine,” Mi expressed her absolute happiness.