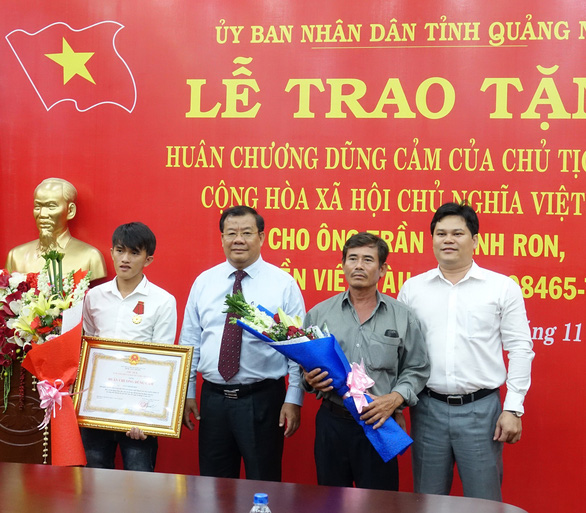 This Vietnamese fisherman sacrifices himself to rescue victims from sinking boat

A Vietnamese fisherman has been, and will continue to be, praised by many for a brave rescue trip in 2017, where he heroically put himself behind for the safety and health of others.

The fairytale-like story of Tran Thanh Ron’s saving four fishermen in a maritime incident two years ago, has got around Quang Ngai again as the provincial authorities are set to recognize the 26-year-old man as one of the nine outstanding residents of the province in 2018 on October 8, 2019.

That was December 16, 2017, when Ron and other fishermen on his older brother’s fishing boat were running to the shore away from bad weather, they received a distress signal from another Vietnamese boat.

The fishing boat calling for help was from the south-central province of Binh Dinh and was sunk by strong waves in a location about 280 nautical miles from the shore, in the vicinity of Vietnam’s Hoang Sa (Paracel) archipelago.

Receiving the signal, Ron, then 25, urged his brother to steer their boat to the location of the Binh Dinh boat.

However, upon their arrival at the place, the Binh Dinh boat and fishermen were no longer there.

Ron and his members did not give up hope but they spent about an hour scouring the location until the 25-year-old man saw the bow - the only part of the ship still above water - and all four Binh Dinh fishermen clinging on a small coracle.

“The [Binh Dinh] fishermen all looked sick while trying to scoop water out of the swamped coracle,” Ron told Tuoi Tre (Youth) newspaper as he recounted the rescue.

The Quang Ngai side threw a rope to the coracle, but only two fishermen in distress managed to use it to climb on to the rescue boat, while the remaining two were knocked down by a big wave.

Without hesitation, Ron tied a rope around his waist and jumped down to the sea to save the two.

He was able to send the two men aboard after 30 minutes struggling in the surging sea water.

Then, a big wave swept Ron away before he could get back to his boat. Fortunately, experience from fishing trips since he was 14 years old helped him survive the wave.

“Now I’m thinking about it, it was pretty scary,” the young man told Tuoi Tre.

After the rescue, it was too late to boat to the shore as the wave surged more fiercely to the extent that the fishing boat could be cracked trying to move on it.

The Quang Ngai and Binh Dinh fishermen thus had no choice but to float on the sea for five days before the weather got better, allowing them to operate the boat shoreward.

“Only when our boat was docked at the Sa Huynh Port [in Quang Ngai] could the guys put their minds at rest,” Ron said.

Tran Duc, the captain of the Binh Dinh boat, said he would feel grateful for Ron and the Quang Ngai fishermen’s help for the rest of his life.

“No word can describe my gratitude for Ron’s heroic action,” Duc said.

Ron also received loads of praise after a video shot by one of the fisherman on the Quang Ngai boat of the rescue was uploaded on social media.

In January 2018, the chairman of the Quang Ngai People’s Committee presented a certificate of merit to the boat’s crew to honor their action.

In November of the same year, Ron was granted the State President’s Bravery Order in recognition of his rescue.

“It was really unexpected for me to receive the Bravery Order and the upcoming outstanding resident award,” Ron said.

“For me, the biggest award is the safety of the guys on brother Duc’s boat.”