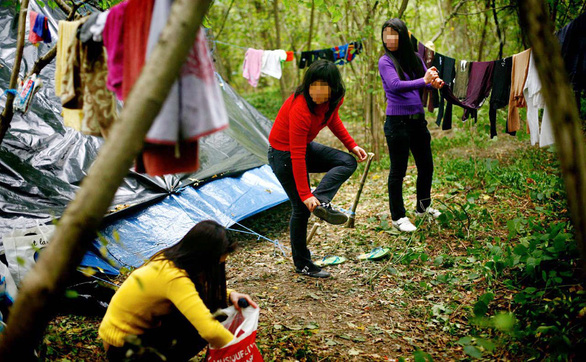 If you are a young person from the north-central Vietnamese provinces of Nghe An and Ha Tinh, the potentially lethal dangers of journeying thousands of miles and being illegally smuggled across borders by international trafficking networks seem like a small price to pay for the reward of little more than the opportunity to work.

H.T.L., a young Vietnamese man from Ha Tinh who has spent the last five years illegally working in the UK, shared his own harrowing migration journey to what many Vietnamese consider ‘the promised land’ with Tuoi Tre (Youth) newspaper, in the hope of shedding light on the dangers that lie ahead for his rural Vietnamese countrymen who are looking outside their native borders for hope and opportunity.

A journey to hell

L.’s 2015 journey to the UK began in the same fashion as most migrants from Nghe An and Ha Tinh – with both intermediate and extended families draining their savings and pawning their assets to raise massive amounts of money to prepay smugglers for transport.

In L.’s case, making it to England set his underprivileged rural family back a whopping US$19,000.

Following the instructions of his ‘broker,' L. then bought a plane ticket to Russia, along with nine other Nghe An and Ha Tinh residents.

Once in Russia, the group of ten had all of their identification documents destroyed before being herded into a small truck and ferried to a series of remote, rural houses with no access to the outside world.

“We were given food by strangers in houses that were blocked off so that nobody would find us,” L. recalled.

Eventually, two Russian men showed up to shepherd the group through Russian forests into Poland.

Those who fell behind were beaten into keeping pace and derogatory slurs were a never-ending soundtrack during the 12-hour walk.

There was water for drinking during the trip, but it had to be squeezed from mud-covered clothing. And of course, border guards were a constant threat.

Once in Poland, the group began the next leg of their journey – 24 more hours of being herded on foot from Poland to France.

It took two days from the time they left Russia until they reached an abandoned house in a French forest where hundreds of other illegal migrants were awaiting transit to the UK.

According to L., some of the females at the house were forced to have sex with their overseers.

“They chose to sleep with the young girls with clean faces,” L. said.

“It was no different from hell on earth.”

The transit house was the last stop before the migrants were boarded onto UK-bound trucks.

But for many, this final stop was the make-or-break moment in their journey.

Some failed to make it past border control while others, depending on their ‘package,' had to find their own way into truck trailers without being spotted by drivers.

Migrants who prepay for VIP packages are boarded into tractor trailers with drivers who are fully aware of the situation.

“Grass” level migrants are forced to sneak into trailers without letting drivers know of their intrusion.

L.’s ‘ticket’ was grass level and he was forced to break into a random container without letting the driver find out he and several other migrants were inside.

When the truck finally made it to the UK, the driver opened the truck and was shocked to find the illegal migrants inside.

The police were immediately called and the dogs were used to chase the group as helicopters tracked them overhead.

“Some rushed toward the forest while others jumped into a pond,” L. recalled.

L. was one of two people able to escape the situation by spending hours hiding in a manhole.

When he finally emerged, he was able to make contact with his friends already in England and was shown the way to a ‘labor camp.’

Eventually, he found a job as a kitchen assistant in a small restaurant where he was able to earn a relatively high salary.