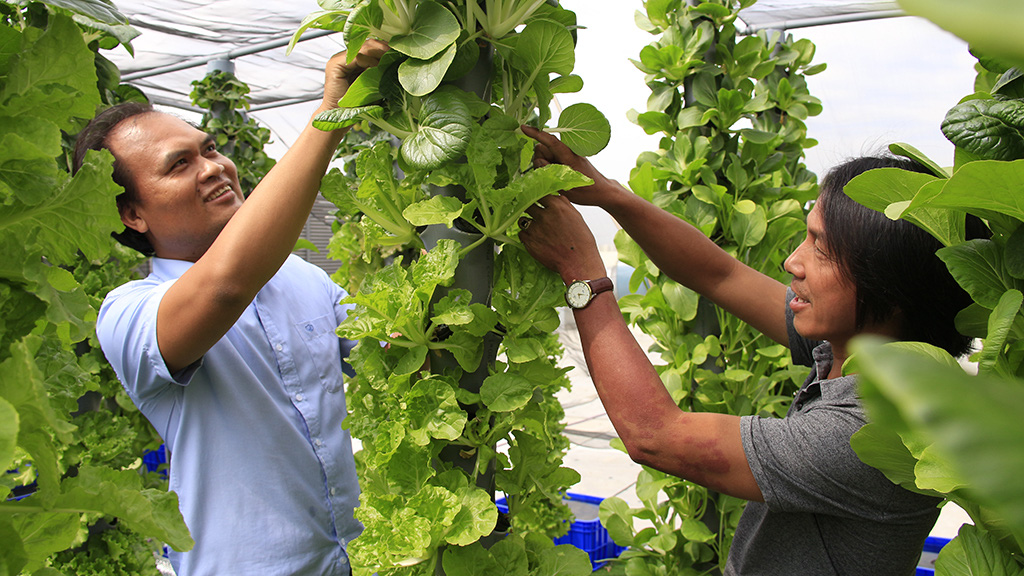 This engineer is bringing green revolution to Saigon’s rooftops

An engineer is using an innovative aeroponics gardening method to grow vegetables on rooftops without the need for soil in Ho Chi Minh City.

Pham Thanh Loc, who runs a hi-tech agricultural services company based in Cu Chi District on the outskirts of the city, has spent several years installing aeroponics gardening systems -- Erofarm -- in residences across the southern metropolis.

Aeroponics is a soilless cultivation technique which involves the process of germinating plants in an air or mist environment without the use of soil or an aggregate medium.

The Erofarm aeroponics systems, which carry footprints as small as 0.5 square meters and are able to grow a wide array of vegetables, are in high demand by consumers across the country looking for pesticide-free alternatives to the produce typically available in local markets and supermarkets.

Loc and his Erofarm team are currently working on Sky-Farm, their magnum opus project which spans 2,000 square meters across a condominium terrace in Binh Tan District.

Their goal is for every rooftop in the city to, one day, have gardens of their own.

Despite his success in the hi-tech agriculture sector, Loc’s background is not in agriculture. Instead, he studied chemistry at university and only audited courses in biotechnology.

Though he eventually earned a master’s in chemistry, he continued studying biotechnology in his free time.

His knowledge of biotechnology eventually led him to the realization that consumers shared a widespread mistrust of the origin of their produce.

When at-home gardens started being trending about five years ago, Loc immediately saw an opportunity to put that interest to work.

Loc began focusing specifically on aeroponics, the process of growing plants while suspending them in the air, rather than placing them in soil.

Plants grown using an aeroponics system are placed into frames held above the ground.

Their roots then grow downwards into sealed boxes filled with air and protected from sunlight while an automatic misting system sprays a nutrient-rich solution into the boxes where it is absorbed by the roots.

A different customized mixture of nutrients is used on each type of vegetable.

Aeroponics can also help cut down on the cost, space, and time needed for traditional gardening.

With those issues managed, the only problem Loc had difficulty solving was eliminating chemical fertilizers from the equation.

“That stumbling block put my project on the verge of bankruptcy. Organic fertilizers are not a good choice for soilless cultivation, especially aeroponics,” Loc shared.

So, being an engineer, Loc took a shot at developing his own fertilizer from scratch.

“I was so excited when my first formula began to take shape,” he recalled, showing off a packet of his homemade fertilizer.

“Now that my air-based crops meet all food safety requirements and standards, I’ve moved on to the second phase of getting test results on criteria that are of interest to consumers such as iron, zinc, and calcium as well as natural compounds like essential oils and vitamins."

As news of his work spread, other scientists attempted to emulate Loc’s particular aeroponics process. Loc has since patented his method.

A one-square-meter system can yield 15-30 kilograms of vegetables in just 25 days.

Erofarm systems also come in a variety of shapes and sizes, starting at 0.5 square meters and ranging well into the thousands.

His next step, he said, is to introduce his model to local schools to set up air-based gardens to provide an added extracurricular opportunity and increase the daily intake of safe produce for boarding students.

“The positive effect of Loc’s model has been felt already. My two kids are really fascinated with the garden. It takes their minds off their electronic devices,” Le Hong Anh, a 38-year-old Erofarm customer, said.

Erofarm has received a sponsorship package of VND1.2 billion ($51,544) from SpeedUp, a program dedicated to providing aid for startups and launched by the municipal Department of Science and Technology.

The company currently has 500 customers in Ho Chi Minh City.

“My customers embrace our model because of its availability. I’m overjoyed to learn that some don’t even bother to seek my help when their system breaks down after five or six years because they are able to replace parts themselves,” Loc said.