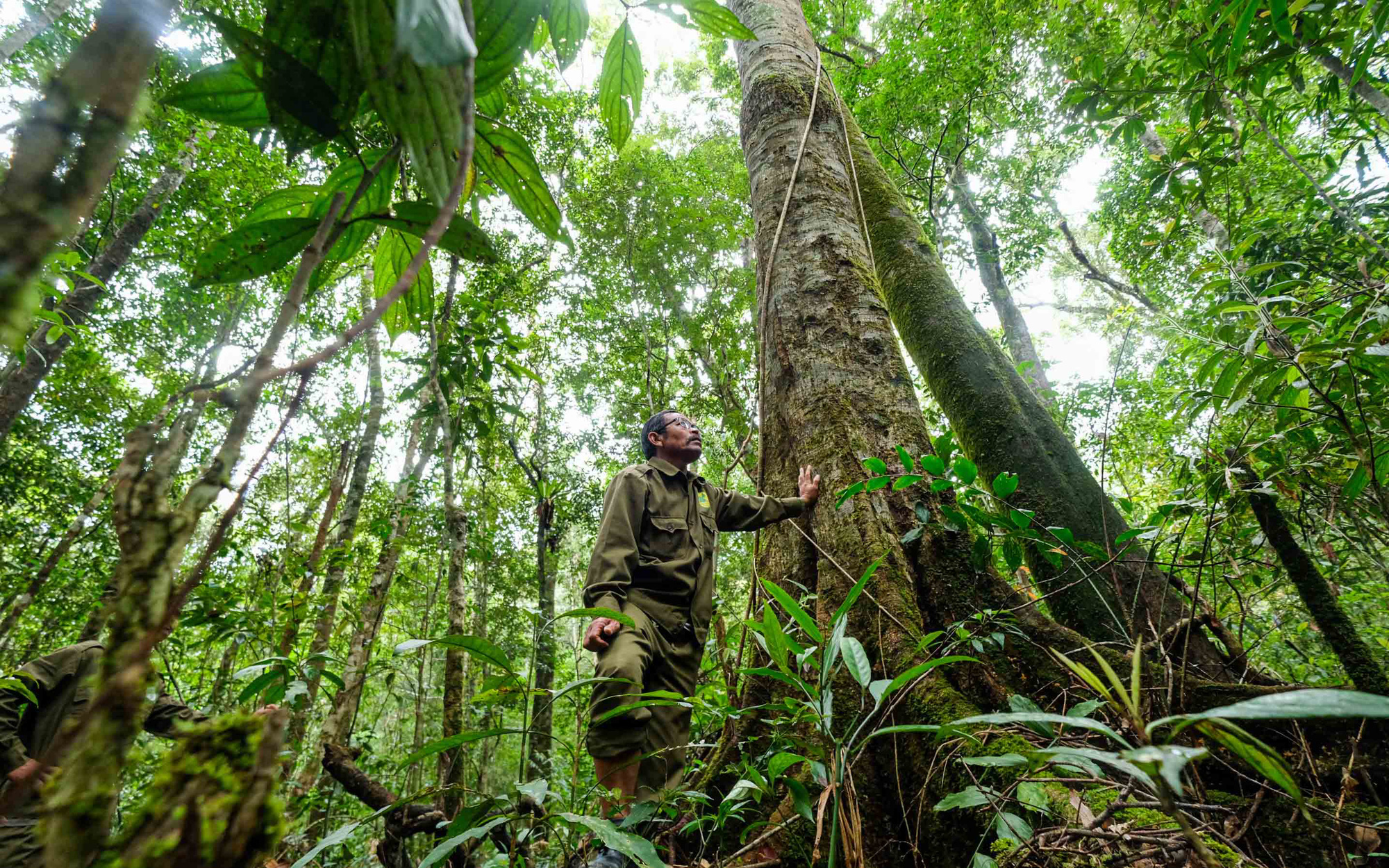 Ha Gian, also known as Old Gian, had served as the vice-chairman of the People’s Committee in Da Nhim Commune, Lac Duong District, Lam Dong Province until he resigned in 1994 to begin a career as a voluntary park ranger.

Every morning, Gian and his team set out to protect over 4,000 hectares of woodland from illegal loggers, carrying with them little more than some sticky rice and a plant-clearing machete.

Though the job is difficult and dangerous, Gian earns only a little bit of cash for his service, thanks to support from local authorities.

Thanks to his credibility and experience, Old Gian has been tasked with leading a team of more than 40 members, all of whom are members of the Cil ethnic minority.

Gian first got involved with forest management about 26 years ago. His success, he says, is mostly due to his sense of direction, which makes navigating the thick forest an extremely simple task.

The official ranger manpower is reinforced by Gian’s team of voluntary Cil forest protectors, who have come to be known as ‘forest squads,’ according to Dinh Huu Dao, deputy manager of the Da Nhim forest.

“We need to hurry or the loggers will take advantage of the coming rain,” Gian urged his ranger team. “They’ll probably be in Da Sar forest and there could be at least ten of them.”

As the old man led the way, his followers noticed he was having difficulty walking properly, with fresh wounds still on his knees from a recent accident in the field.

Using only the map in his head, Gian led his team to an illegal logging camp nestled amongst dozens of endangered gingko and elm trees.

According to Le Chi Quang Minh, vice-chairman of Lac Duong District, the trees are under strict protection and anyone caught logging them will be put behind bars.

Gian and his team were able to chase the loggers away, but not without a few close encounters with the rugged terrain surrounding the logging camp.

“It was lucky I didn’t fall down the cliff. That was really scary,” Gian said.

Gian has 26 years of experience patrolling the forest and leading professional ranger teams.

Ten years ago, illegal tin miners and loggers were highly active in the forest. Thanks to Gian’s squad, local authorities have since declared the forest free of such activities.

Trinh Van Phi, head of the Da Nhim Forest protection station, was not shy in commending Gian for his dedication.

“Gian has an intense love for the forest. He feels it’s his duty to volunteer to protect it,” said Phi.

“We have never had to remind him to do his job. He also does more than just catching loggers. During the dry season, he and his crew will clear the forest to make way for young fern trees.”

Our forest, our pride

Over a drink, Phi asked Old Gian what drove him to dedicate his life to the forest.

“The ancestors of the Cil ethnic people have lived in the forest for thousands of years,” the old ranger answered. “If we lose our forest, we lose our pride.”

The Cil people account for the majority of the population in Da Nhim Commune.

Every morning of the new week, the young squad members gather in front of the Da Nhim Forest protection station for a debriefing of their job.

Their vehicles are packed with the machetes, spades, and hoes they need to aid them on their hours-long trips through the forest.

Old Gian is also skilled in rangers’ task and forest management, just like a trained forest officer, and often does his best to pass along such knowledge to his fellow Cil people, according to Minh.

Minh also noted that the sheer number of rare species of animals and plants in the area of Bidoup – Nui Ba and Da Nhim is a major attraction toward illegal loggers.

Gian knows the forest like the back of his hand, and can even sniff out booby traps and disable them.

“He uses the marks on leaves and bark in order to discover potential dangers,” Minh said.

“We feel safe with Old Gian as our leader and are thankful he joins us on our long-haul patrols.”