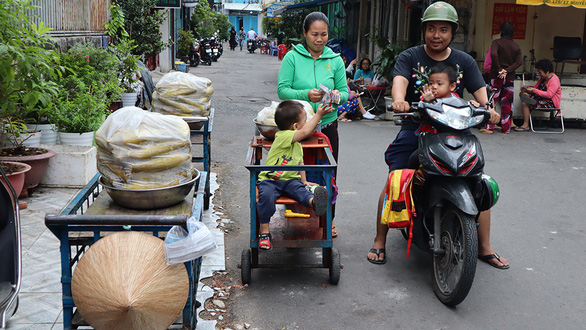 When love budded between Le Van Truong and his wife Nguyen Thi Hang, who is nine years his senior and walks with a limp, it just happened and blossomed no matter what other people thought.

Though Truong and Hang seem not to fit at first, they were cut out for each other and made a fairy-tale love story amid the bustle of Ho Chi Minh City.

For the 31-year-old, well-built Truong, the thing that matters is the affection he feels toward his other half.

A third-generation peddler of boiled corncobs, he is well known in his neighborhood at the Nguyen Thien Thuat tenement, located in District 3, Ho Chi Minh City, as the ‘corn king.’

Truong’s paternal grandparents left Cho Lon in District 5, the city’s ‘Chinatown,’ where many Chinese Vietnamese live, for the tenement prior to 1968, when Vietnam was being torn apart by war.

The apartment building underwent a revamp after getting engulfed and destroyed in a bombing-caused fire in early 1968.

Truong’s parents secured an apartment on the top floor as inhabitants were allowed to pick a draw for one of the rebuilt flats.

The whole family wasted no time to resume their family business of peddling boiled sweet potatoes, cassava, and corncobs before cutting their wares down to corncobs due to a lack of people to run the business, according to 62-year-old Le Van Son, Truong’s father.

At nine years old, Truong began following his parents around the local streets, where they struggled to scrounge up enough cash to pay grocery bills and tuition.

After graduating from college years later, the young man found a job in mechanical electrical refrigeration and worked for a while before resuming his peddling business to be near home and take care of his elderly parents.

Standing over 1.7 meters tall and being the only child in the family, Truong met several girls through matchmaking but ended up tying the knot with Hang, his current wife.

His parents and neighbors were all taken aback at the pairing.

“One day, Truong brought home a girl who was walking with a limp," Minh, one of the neighbors, said about the couple.

"They got married just a few months after that.

“The entire family selling corncobs throughout the neighborhood makes a cheerful sight.”

Despite growing up poor, Truong was taught to be obedient and loving to his parents and think for others as well, said 60-year-old Dang Thi Mai, Truong’s mother.

"As a grown-up, he is actively engaged in community and charity work,” she shared.

“That’s what brought him and Hang, his wife, together.”

Hang suffered from childhood polio, leaving one of her legs weakened, which causes her to walk with a limp.

Born to a poor family with six siblings in the north-central province of Ha Tinh, Hang made her way to Ho Chi Minh City to learn how to sew when she turned 20 before getting recruited by a company in neighboring Dong Nai Province.

Hang spent her entire savings after four years' work to buy a tricycle and keep a few pigs, hoping to settle down back in her hometown soon.

She became almost empty-handed when the pigs died one by one of disease.

The strong-willed girl was dealt another blow when a road accident in late December 2016 left her tricycle, her only asset, broken, with her being hospitalized in Bien Hoa City, the province’s capital, for an infected wound on the leg.

Penniless, she had no choice but to shelve her plan and go back to her hometown.

It was during these darkest moments that she met the love of her life.

“I’m always weighed down with an inferiority complex over my physical disability," she confided.

"Being in a relationship and getting married are the last things I dreamed of."

Through a charity group of a Ho Chi Minh City-based church, Truong got to know Hang and raised funds to help lift her out of adversity.

“Deep inside me, I was more than grateful to the young man who caringly tended to my injury for several months during my hospitalization and helped me with my move to a rented room later,” Hang emotionally recalled.

Truong himself could not imagine their paths would soon cross.

“It was only compassion at first," he shared.

"Feelings came without me even realizing them.

“Still, I was not sure of what my emotions were about.

"I then sought my parents’ permission to get her home for shelter while trying to have her three-wheeled motorbike fixed and find her a job.

Truong met with his father’s objections when he announced he would marry Hang.

"I was just worried that Hang would suffer the most if their marriage went wrong."

Truong’s parents were soon convinced of the couple’s true love.

A simple wedding was held right at the torn-down tenement in late 2016, with the couple’s two healthy sons coming about shortly after that.

Each morning, wafts of scents from freshly boiled corncobs emit from their home.

Truong, his wife, and his mother divide nearly 200 cobs among one another before splitting to sell them during the day.

Against all odds, the couple gives each other their dearest affection, ready for a tough life together ahead.