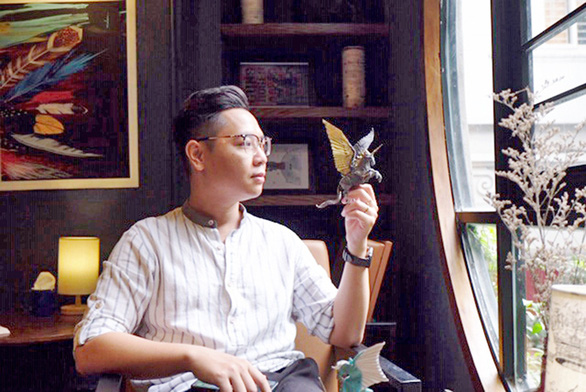 Like other people who have a passion for Origami, which is the Japanese art of paper folding, Son started to fold horses, cranes, and simple flowers when he was a newbie.

After eight years of practice, he was able to create various and unique models of Origami.

One thing that makes Son’s models unique is the paper material from which he creates the models.

Son uses ‘do’ paper, which is a kind of material made from the inner bark of 'do' trees traditionally produced in many villages in Vietnam, to fold Origami models.

“There are many ways to make Origami models, but I figure out one way for myself," Son, a 27-year-old employee working in Hanoi, told Tuoi Tre (Youth) newspaper.

"I only fold a model in a square of paper, without using scissors and glue to make it unique.

“Despite not being the first Vietnamese mastering the Origami art, I hope my creative models will inspire other young people to pursue the passion."

Son learned about Origami for the first time eight years ago thanks to reading the comic series 'Origami Fighter.'

After reading the series, he began learning to fold the models of Origami from the instructions in the book series.

Son was also preparing for a university entrance exam at that time so he spent around 30 minutes every day folding Origami models as a way of relaxing after hours of hard study.

On top of that, the art of paper folding helped him learn better, especially in geometry, imagination, and logic, and equipped him with patience and carefulness.

As an Origami newbie, Son chose to fold simple models, including many popular existing types.

He then looked for information on the Internet and set about creating his own models.

“Like the art of painting, when you create an Origami, the model would reflect your personality very clearly," said Son.

“When you fold a model, it will show what your personality is.

"As for me, I am good at folding animals and mythological animals."

Son is interested in folding fantastic animals in ancient myths such as the horse, dragon, phoenix, unicorn, and deer.

The more complicated the models are, the more enthusiastic and eager he becomes.

Folding an Origami model goes through many stages: designing a folding model, making a scratch on a designing application, folding the model for testing, preparing 'do' paper, and then folding the final model.

The most important phase is setting a proper proportion on a paper, according to Son.

The model could become a failure if the proportion is not set exactly.

At the stage of folding for testing, Son has to check again whether the proportion is correct or not.

He would have to start from scratch again if the proportion is not perfect at this stage.

“There were some complicated types that made me fold again and again,” Son said.

"They forced me to fold for testing around six to eight times before having a successful model."

Among the diverse types of models that have been made for the last eight years, what Son likes most is the model of a European dragon that is inspired by the blockbuster 'Lord of the Ring,' Greek mythology, and Norse mythology.

To map out the way to fold the dragon, Son uses a sheet of paper, measuring 1m x 1m, that would be divided into 128 equal parts.

It took Son around two months to figure out the idea of designing and produce the model.

The finishing phase then cost him another month.

Son’s model of the dragon has been displayed at the museum of Zaragoza in Spain.

“I am so proud that a Vietnamese Origami model gets a warm welcome abroad," the young man told Tuoi Tre.

"I required the organizers to show my full name in the Vietnamese style, which is written ‘Nguyen Nam Son.'

“Many people offered to buy my work of art, some asking me to fold models for them.

“Thanks to the competition, I had a chance to meet with many foreign friends in the art of paper folding."

The secret of 'do' paper

With the aim of creating Origami models on just one sheet of paper and without the use of glue or scissors, Son finds the most important challenge he must address is to find out a suitable material.

According to Son, there are four most important criteria he must meet when it comes to choosing a kind of paper for folding.

They are durable, foldable, easy to color, and shape.

Son has tried to use various kinds of paper material that exist in Vietnam in vain.

He found 'do' paper by chance when he was reading about the traditional paper used to draw ancient paintings in Dong Ho Village, located in the northern province of Bac Ninh.

Given the fact that Dong Ho paintings remain intact after hundreds of years due to using this kind of paper, Son went to villages in the northern provinces of Hoa Binh and Bac Ninh to get to know about the production of 'do' paper.

At first, Son found that 'do' paper is thin, easier to tear, and has a plain white color.

He tried to combine various kinds of glue to create natural colors and varied patterns that he wants to have for Origami models.

Many of them were so curious about the kind of paper Son had used that they contacted him to place an order for the material.

Despite having a big love for Origami, Son considers it as a hobby apart from his main career.

He must find ways to balance between them.

He spends from 45 minutes to one hour per day immersing himself in Origami creation.

Son intends to continue to take part in Origami international competitions in the future.

He plans to join some of his friends in publishing a book giving instructions on folding Origami.

In 2017, Son contributed his model to the exhibition held by Zaragoza Museum in Spain.