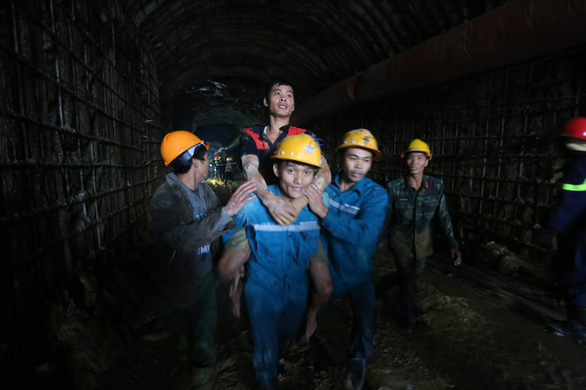 In a moment of life and death, four miners were pulled out of a collapsed pit, covered in peat.

Quang Ninh is a province famous for coal mines in northern Vietnam.

A glimmer of hope

“Off to handle an incident,” Tran Xuan Thang, head of Ha Long Mine Emergency Station, texted his wife before creeping into the pit with teammates.

“Four people were cramped in a hole about 165 meters below the ground,” recalled Thang.

“We thought they were still alive since we could see flashlights through the rubble.

"The groundwater leaked and was slowly filling the pit.

"If we did not pull them out, they would have been drowned by water and peat."

“There are four people! Alive!” someone shouted from afar.

“Our feet are trapped by iron poles.”

Thang and his teammates cut off wooden logs which were used to support the pit to make the way to the bottom.

As they entered the pit, rescuers scooped water out, took off rails to hold up the pit’s ceiling, and opened shelters in case of another collapse.

“Once we stopped bailing water, it rose up to our necks," Thang recollected.

"The team put victims on stretchers to bring them out.

“We laughed so hard that we might have made the pit collapse again.

"It is our happiness to bring them back intact."

Rescuers of the station lose count of how many times they have crawled into collapsed pits.

All they can remember is the fragile hope before every operation.

In a pit collapse at Dong Bac Coal Company, also located in Quang Ninh, which trapped three miners, Thang and their fellow rescuers had to lie on their backs using helmets to scoop out coal and rubble.

No machine could help. They had to use spoons to shave layers of coal and carefully take the victims’ feet out.

“We had to keep talking to help them forget the pain," said Thang.

"When a miner was finally put on a stretcher, I pinched his foot.

"He said ‘I feel pain,’ which means it was not paralyzed.

Pham Van Hieu, head of the station’s technical department, said they hosted drills weekly on every single type of incident that could happen in a pit – gas explosion, landslide, and water leakage, among others.

Being the station’s members means they have to be always on alert and ready to operate rescues for weeks.

Among all kinds of incidents, the chance to survive a gas explosion is the lowest.

On the fourth day of the rescue, a worker was still missing.

He was in charge of measuring gas levels in the pit so no one had any idea where he headed to.

The team found the head of an air compressor on the same morning.

“He must have been around there,” Thang recalled the moment he traced the victim.

Some 30 minutes later, a piece of metal was seen sparkling among crushed coal.

It was a ring divided in half.

A wedding ring, Thang thought, as he saw two H letters engraved into its surface.

A manager confirmed it belonged to a worker named Hieu, who was later found dead under the wreckage.

“It was morose thinking of a cut wedding ring,” said Thang.

“We have operated hundreds of rescues.

"Each of them is a memory.

"It can be called a success when every victim is found.

"However, perfect happiness is achieved only when we can rescue them alive."

Thang’s team lost a member in the Khe Cham incident due to gas poisoning.

To rescuers, to search for victims in pit incidents also means to gamble their own lives.

“Illegal mines are the most dangerous,” said Nguyen Van Hieu, deputy head of the station’s technical department, “as they do not follow any safety standard while having no supporting structure, no exit, and no ventilation space.”

Hieu recalled a pit’s water leakage in Hoa Binh Province, about 290km west of Quang Ninh, in 2012 when no one could draw its map, even the owner.

Rescuers had to imagine the pit’s structure as they entered inside.

The last victim was trapped in a bundle of tree logs about 700 meters away from the pit’s gate in a narrow tunnel.

“Finally seeing his body, we tried to crawl closer yet peat and rocks poured down," Hieu recounted.

"One mistake and we would have killed."

It was on the rescue’s fifth day and the scene was filled with gas.

In late 2014, while the rescuing team was weeping with happiness after taking out 11 workers trapped in the Da Dang hydropower tunnel in Lam Dong Province, Pham Van Ha, deputy head of Ha Long Mine Emergency Station, went back to the incident scene, followed by deputy head Hieu.

Crawling into the tunnel from a side gate, Ha suddenly found an immobile body.

“He was too old and too weak," Ha recounted.

"All younger miners were able to escape the tunnel and be rescued.

"He was trapped there.

"The tunnel was dark and he was too exhausted to get out.”

It was a miracle the victim was found at the last minute.