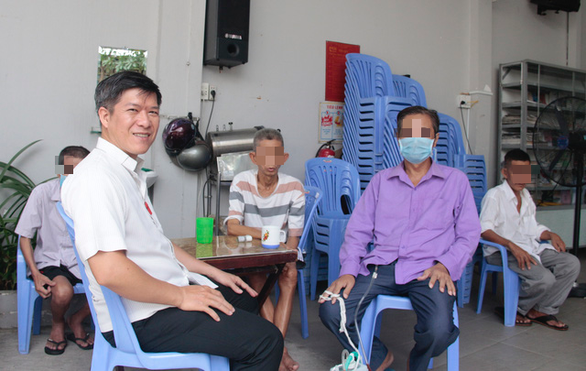 Over the years, father Tu, a 50-year-old priest in Thu Duc City, has welcomed thousands of terminally ill patients into Naza consolation house – a hospice home which offers end-of-life care to those with nowhere else to turn.

A home for underprivileged

The house is run, in many ways, like a cooperative, with healthier patients caring for those with more serious illness – like one big family for those who need it most, but have no one else to turn to.

Father Tu first opened Naza consolation house in 2007 in Tan Phu District. Back then, the house mostly took in late-stage AIDS patients looking for a shelter.

Unfortunately, the first iteration of Naza consolation house did not end in success.

“The facility was too small to provide proper palliative care to severely ill patients. We simply couldn’t give everyone everything they needed, and many people we tried to help passed away from their illnesses. Eventually, the landlord took the house back,” father Tu explained.

Determined to follow through with his duties as a Camillian father, father Tu put out a call for donations and eventually secured a new location in Thu Duc.

The project soon turned into a community effort. Father Tu’s parents supported the cause by providing food to the patients and neighbors like Cao Thi Dao lent a hand in other tasks, such as cleaning the house and weeding the garden.

“It was a shock to see so many patients coming here to die, but over time we began to understand the house’s mission and wanted to help. All our neighbors know Naza very well and support it wholeheartedly,” Dao said.

Camillians, also known as Ministers of the Sick, are Roman Catholic religious order with a mission to provide spiritual and physical care for the sick.

In Vietnam, the order has been active through the Roman Catholic Archdiocese of Ho Chi Minh City since 2003.

Priests from the order opened the Mai Tam shelter for single mothers and orphans affected by HIV and AIDS in 2005.

Naza’s mission has expanded over the years to help patients who are terminally ill from nearly any disease. The house also operates after-hours clinics throughout the Mekong Delta where those in need can seek out free physical exams.

These initiatives were all formally integrated under the same umbrella on December 12, 2018 with the establishment of the Mai Tam Social Enterprise.

Currently, there are about 25 patients staying at Naza, the youngest being a 32-year-old cancer patient and the oldest a 94-year-old man with no family to turn to.

Father Tu also works to reconnect patients who do have families with any relatives they might have lost touch with.

Each resident lives at the home free-of-charge, with medicine, insurance, and meals also taken care of by the Camillians.

Other medical related necessities, such as physiotherapy and rehabilitation, are provided by father Tu and a team of volunteers.

“If not for Naza, I might have died for a long time,” said a Naza resident with HIV.

M., a 34-year-old HIV patient, is equally thankful for father Tu and Naza.

She has now regained her weight and has the virus under control thanks to medication. Rather than search for a job, she has decided to stay at the house and help father Tu care for other patients.

“The house picked me up from my lowest point. I can’t just leave. We are a family so it is easy to empathize and look after each other,” said M.

Among the 1,000 who have stayed at Naza of the years, there are many who have been able to regain enough health to move out and try to build a new life after managing their diseases.

Father Tu is most proud of his past HIV and AIDS patients who were able to move on, remarry, and have healthy children.